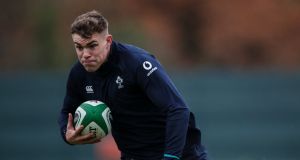 Garry Ringrose is back in midfield for Ireland against the All Blacks. Photograph: Billy Stickland/Inpho

Kearney played in every game of the successful Six Nations campaigns of 2009, 2014, 2015 and 2018 as well as the win in Chicago. Ireland need him to rule the skies against the All Blacks.

Was solid against Argentina despite not getting the ball or space he craves, with Ireland often too narrow in attack. Performs his defensive duties with quiet efficiency.

His return is a major boon, especially given Robbie Henshaw’s absence. O’Driscoll-esque with the ball in hand, his defensive reads will be of equal importance against the world champions.

Henshaw’s injury has spared Joe Schmidt a serious selection headache - fearsome yet nimble, Aki carried superbly against Los Pumas, and he could make a big statement against his Kiwi compatriots.

Like Earls, he was on the periphery for large parts of the Argentina win as Ireland struggled to get him involved. His electric finishing ability and strength in the air will be key.

If Sexton - Ireland’s beating heart - delivers on Saturday, then Ireland have every chance. No Conor Murray means his kicking and game management must be perfect, which they usually are.

What a test this is for Marmion, and what an opportunity. Sharp passing, clever and accurate kicking and alertness round the fringes will allow him to hold his own and more.

Back to his best with the ball in hand - more streamlined but just as destructive. He knows he can empty himself for 50 minutes before Jack McGrath comes on for the crescendo.

The Irish lineout stuttered against Argentina and he struggled to have much of an influence on the floor - that said, it would be premature to write him off and his experience is invaluable.

Furlong has played five of his 30 Irish and Lions Tests against the All Blacks - winning two, losing two and drawing one. The world’s best tighthead can swing that brilliant record in his favour on Saturday night.

Toner’s return to shore up the Irish lineout and restarts is vital on a night when all systems must run smoothly. A fascinating battle with twin totems Retallick and Whitelock awaits.

Man of the match against Argentina, it is already clear Ryan is heading for greatness. His tackling is as relentless as his ball-carrying, where he blends power with improbably cute footwork.

If the All Blacks are to beat Ireland their pack must be prepared to enter the trenches with Munster’s dog of war. His work on the ground and jumping at the lineout will be crucial.

Promoted to the starting line-up after Dan Leavy’s withdrawal through injury, the Leinster openside is in fine form for his province but will face a huge task if Ireland are to get parity in the back row.

Stander topped the carry charts with 18 against Argentina. Relentless in attack and defence, he is becoming more subtle with the ball in hand as he matures on the international stage.