Ireland v New Zealand: Leavy still a concern despite being named in team

Ireland head coach Joe Schmidt says it would be a “huge feather in the players’ caps” to beat New Zealand, something Ireland have managed only once in 30 attempts. 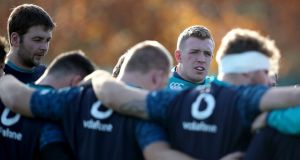 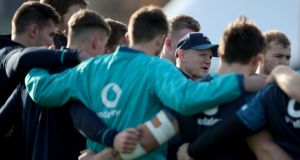 Ireland coach Joe Schmidt only informed the Ireland players today who would face New Zealand on Saturday at the Aviva stadium.

Concerns about Dan Leavy’s availability have not been fully allayed - he didn’t train on Thursday morning - but the 24 year old Leinster flanker has been named ahead of Josh van der Flier.

“It’s never ideal but we needed some guys to get through training,” said Schmidt. “We needed the medics to be satisfied.

“We expect Dan to train fully tomorrow. He is only recently back playing so we are just trying to manage him. He trained very well Tuesday so to train Thursday and Friday would have been a big ask.

“He didn’t sleep particularly well which is another warning sign that if we push him too hard all we are going to do is fatigue him, not prepare him.”

James Ryan is also believed to have missed some sessions this week but the 22-year-old is named ahead of Iain Henderson as Dev Toner returns to iron out set piece concerns against New Zealand’s towering duo of Brodie Retallick and Sam Whitelock - who both missed the Chicago match in 2016 but returned two weeks later, as New Zealand exacted their 20-9 revenge in Dublin. This weekend they pair up for a record 50th time.

Other changes see Rob Kearney return to fitness and fullback as Jordan Larmour drops to the bench and with Robbie Henshaw ruled out medium term, Garry Ringrose returns at outside centre in place of Will Addison to renew the partnership that damaged England in the Grand Slam game at Twickenham last March.

Kieran Marmion fends off Luke McGrath to be retained at scrumhalf as Conor Murray continues to creep towards full fitness.

“Conor is getting there but what a fantastic opportunity for Kieran to step up.”

A year out from the World Cup, Schmidt sees only the present task: “World Cup cycle is a completely nebulous term for us. We speak about circadian rhythm of the day to day. Our cycle is a 24 hour one, a weekly one.”

Of bad blood that remains from the “over the edge,” to quote Johnny Sexton, match in Dublin from November 2016, Schmidt added: “I think people can make their own minds up about (the high hits on CJ Stander, Robbie Henshaw and Simon Zebo). I know the feedback we got were there was some decisions made by the referee (Jaco Peyper) that day that befuddled everybody. I don’t think there is any confusion about that.

“At the same time we got to get out there and give as good as we get. That’s going to make a fairly spiky contest I would think.

“We weren’t that far away in that test. 14-9 with 15 minutes to go is a one score game when Malakai Fekiota scored that try that was a bridge too far for us to cross. Based on what they did to England they will certainly come after our lineout. When the game is up and running the game will be fairly manic.”

Regarding talk from the New Zealand media about Bundee Aki stabbing his country in the back, Schmidt listed off the All Blacks not born in New Zealand.

A relaxed coach and Ireland looked and sounded ready for the manic battle to come.

“I’d like to think we will be in the game but there is no team in world rugby that can score as quickly as the All Blacks. It’s always a big deal to beat them. That’s why we limit ourselves to once every 115 years. We don’t want to get carried away.”