Leinster’s Joe Tomane ruled out for up to five months 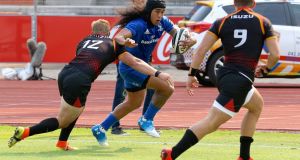 Leinster will be without centre Joe Tomane for up to five months as he recovers from a procedure on his hamstring.

The Australian centre, who joined the province this season, injured his hamstring in the the team’s last game against the Southern Kings (a 38-31 win in South Africa).

Leinster revealed on Thursday that he underwent the procedure “to repair his hamstring” this week, and could be out until April.

The Champions Cup quarter-finals will be played over the last weekend of March, and the semi-finals are on the weekend of April 19/20th/21st.

Rory O’Loughlin sustained a knee ligament injury in the same game and is going through a period of rehabilitation. A further update will be provided next week, but “he is not expected to be out for long”.