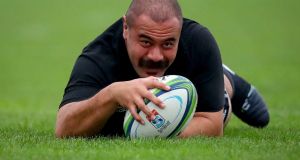 A standout performer at Twickenham, McKenzie’s low-centre of gravity and ability to step off either foot means tackling him is like trying to catch a ferret. A serious danger at 15 or first receiver.

Refreshed this year after taking a sabbatical, All Blacks pragmatism means he has been operating on the wing as well as fullback. Smith possesses supreme vision and graceful, devastating running.

Goodhue had a quiet afternoon at Twickenham but he is expected to wear the All Blacks 13 jersey for a generation, and after six caps has already split the Crotty-Sonny Bill axis.

The man who broke Irish hearts in 2013 returns to the starting XV in the absence of Sonny Bill. An intelligent footballer, his introduction against England helped turned the tide in the All Blacks favour.

A stunning record of 22 tries in 22 Test matches tells you everything you need to know about Ioane’s predatory instincts on the left wing. Supremely physical to boot, Keith Earls will have his hands full.

The best outhalf in the world? His vision, running game and passing ability are unparalleled - but a lack of accuracy from the tee could cost the All Blacks, the drawn Lions series a case in point.

The world’s second best nine is quicksilver around the fringes with lightning distribution. If his box kicking improves from Twickenham he can really put Ireland under pressure.

Tu’inukuafe’s rise this year has been stunning, having started 2018 without a Super Rugby contract. A destructive scrummager, the former security guard is also deceptively mobile around the park.

A very physical and mobile hooker, he has retained his place despite the return of Dane Coles. Ireland will look to attack the All Blacks lineout, so his throwing must be clean.

The scrum will be key at the Aviva and Franks is renowned for his set piece prowess. He is equally brilliant around the field, and a big tackler - a frontrow battle for the ages awaits.

Retallick delivered a freakish display against England, destroying the hosts lineout - particularly in the second half. A similar performance at the set-piece on Saturday night could wreck Irish dreams.

Played second fiddle to Retallick at Twickenham but was no less impressive. He has a huge engine, the handling skills of a back and is a serious threat from set-pieces. Absence in Chicago was crucial.

A backrow monster, Squire is dynamic around the park and a slick lineout operator. He had a quiet game against England, but will carry hard and often on Saturday night.

Savea enjoyed a fine Rugby Championship and takes the number seven jersey in the absence of Sam Cane. He carried with aplomb at Twickenham, consistently getting over the gainline.

The All Blacks’ talismanic captain is brilliant across the park and runs a dominant lineout. Leadership and decision making will be pivotal on a night where scoreboard accumulation is needed.