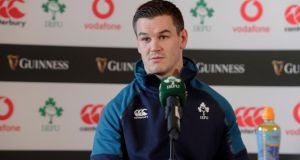 Robbie Henshaw, rather than Conor Murray’s confirmed absence, is the real loss felt within the Ireland squad ahead of Saturday’s sell-out at the Aviva stadium against New Zealand.

Henshaw’s hamstring issue, sustained in the warm-up of last Saturday’s 28-17 victory over Argentina, forced Joe Schmidt to give Will Addison a home debut at outside centre.

“Robbie’s been a big part of the team over the last number of years and has bounced back from a number of injuries [shoulder and knee],” said Johnny Sexton before training in Carton House. “Remember how he bounced back for Leinster with that incredible performance in the semi-final against Scarlets after been out for so long? I’m sure he will bounce back quickly again but he is a loss for us this week.”

Bundee Aki and the returning Garry Ringrose are set to re-form their midfield partnership from the Grand Slam game at Twickenham last March.

Following All Blacks coach Steve Hansen stating with near certainty that Murray would feature this weekend, the IRFU released a statement Monday lunch time ruling the 29-year-old out of the Guinness Series.

“He’s just trying to make sure he gets it right going forward,” Sexton continued. “It’s a big ask if you’re out for a few weeks and asked to play the All Blacks but [five months] would be a big step up. Hopefully we see him back soon.”

Having decided not to undergo neck surgery, Murray’s next opportunity to play comes when Munster travel to Zebre on November 25th.

Ringrose (hip), along with Kieran Marmion (ankle) and Rob Kearney (shoulder), are set to be passed fit to face the world champions.

Sean O’Brien must undergo arm surgery so Dan Leavy’s second half performance against the Pumas should be enough to keep Josh van der Flier out of the number seven jersey.

Of the recent troublesome interactions with English referee Wayne Barnes – most recently Leinster’s defeat in Toulouse – Sexton added: “We pride ourselves on our discipline. We have come on the wrong side of Wayne Barnes in the past so it is something we are going to have to look at even more so this week. We try to play by the letter of the law but in certain games we haven’t got that right with him. We need to really look at ourselves and be extra vigilant. We’ve been penalised a lot in the past by him so we need to be really wary of our own discipline this week.”

And on Eddie Jones stirring the pot, once again, about Sexton getting preferential treatment from referees when it comes to late tackles?

“I don’t know how I was mentioned at an England v New Zealand press conference. That still baffles me. I didn’t think we were playing England until February.”

1 Brentford eye €178m windfall with Premier League promotion
2 James Ryan injury could open the door for Ryan Baird
3 Shane Lowry finds some welcome form as US PGA looms
4 The shuttle run that will get you to your desired fitness destination
5 Ken Early: Frank Lampard’s problems start at number one
Real news has value SUBSCRIBE