Matt Williams: Argentina have discovered their rugby DNA and pose a real threat 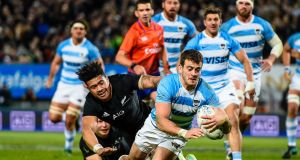 Argentina’s Emiliano Boffelli scores a try despite the tackle from Ardie Savea of New Zealand during the Rugby Championship. Photograph: John Davidson/Inpho

As Argentinian rugby continues to take massive strides forwards, the Pumas are flourishing.

This year the Argentinian Super Rugby team, the Jaguares, won games on the road in New Zealand against the Blues at Eden Park (not easy) and the Chiefs. Then in Australia, they defeated the Brumbies and the Rebels. In Argentina they defeated the Lions, the Stormers, the Bulls, the Sharks and the Waratahs.

In making the Super Rugby quarter-finals, Los Jaguares created a breakthrough season. Like Ireland, the Pumas are reaping the success from the outstanding performances of their provincial teams.

Only having one professional team is admittedly limiting, but during this season’s Rugby Championship, the Pumas pushed New Zealand for 70 minutes and defeated both Australia and South Africa.

Los Pumas and Los Jaguares are playing a joyous, free-flowing, open style of rugby that reflects the spirit and the character of their nation.

The Pumas have finally discovered their rugby DNA. They understand the purpose of how Argentinians play rugby. That is powerful.

Over the years, life has been tough for the Pumas. Their players were in competitions all over the globe. There was no professional rugby at home and, at times, amateur players were selected on the national team.

Throughout that time, I observed courage, effort, pride and immense individual skill but I could not see a distinctive Argentinian way of playing.

However Mario Ledesma has changed all of that. He has created a unique and exciting style of play.

In Ledesma’s playing days with the Pumas he had the New Zealanders Alex ‘Grize’ Wyllie, Graham Henry, and the fabulous French coach Fabien Galthié as technical advisers. He then coached with Michael Cheika at the Waratahs and the Wallabies. He has taken all his lessons, from those illuminated rugby minds, and merged them into a unique style that is Los Pumas.

The Pumas are playing a running and kicking game that is capable of defeating any team, including New Zealand Their attacking game is based on great footwork, offloading and huge enthusiasm in support. The tries they score are spectacular. The rugby is exciting, unpredictable and unlike the highly patterned Irish, unscripted.

The single aim of this is to win the 2019 World Cup. November internationals are important and every team wants to win but Ledesma knows, like Australia and New Zealand, with whom he has worked so closely, the big games will be in Japan in a year’s time.

The Pumas’ method will be successful there. To win a World Cup, you have to be able to beat the Kiwis. That is the real prize. You cannot rope-a-dope a win against New Zealand, you have to go out and play positive attacking rugby and score four tries or more. Anything less will lead to failure.

The best way to score tries is from a counterattack. Using possession that has been turned over, either from kicks or ball stolen at the breakdown. Los Pumas’ counterattack is lethal. They will make you pay if your kick chase defence or your breakdown work is sloppy.

They are made up of slightly framed athletic backs, giant tight five forwards, an aggressive back row and gifted, skilful halves. Rugby is a game for all sizes and the Pumas reflect this.

I admire their play, their thinking and the execution of their plans.

This will be a real test for Ireland.

Let me be clear. I believe that Ireland can win the next World Cup. They have an excellent team, a great half-back combination and exceptional set piece plays. The team is experienced in winning and they have a high-quality coaching staff.

The challenge for Joe Schmidt and his team is to improve again – even after the best year in Irish rugby history. That’s a tough gig, but to stand still is to go backwards.

The greatest area of improvement required for Ireland to win the William Webb Ellis trophy is to score more tries from the counterattack. The time to start this is now.

There are a few excellent individuals who will run brilliantly, but very little in the way of an Irish counterattacking system.

Last June in the third Test in Sydney, the Wallabies’ analysis showed that Ireland’s attack from lineouts was the best in the world. The simple answer for the Wallabies was to not give Ireland as many lineouts. The Australians kicked long and not for touch. Ireland do not like to start their attack from a counterattack.

It was a plan that almost worked. If not for the horrific Wallaby discipline and lots of unforced errors, a very average Wallaby team might have won.

The Australian tactics exposed Ireland’s limited ability to play high-quality counterattack. As every international coach on the planet watched, notes were drawn and plans were made.

Argentina will run the ball, using every last few centimetres of space at the Aviva. In defence, Ireland will be pressed and pushed.

In Melbourne Cup week, on a beautiful home track, Ireland should win in a photo finish, by a short half-broken nose.

But don’t be surprised if the joyous outsider Los Pumas, out of Los Jaguares, sired by Argentina and expertly ridden by a very large Mario Ledesma, steals this one at the post.