In 1905 the first All Blacks had achieved ‘perfection’

Ireland and the All Blacks through the years: Little known force changed the face of rugby 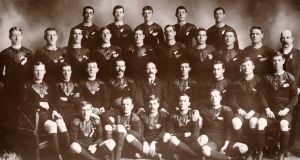 They caused a stir from word go. The first New Zealand tour set off from Wellington on July 30th and arrived in Plymouth harbour 42 days later. In England, the expectation was that the colonials would be easy pickings but from the very first game against Devon – then the brand leaders of the English game – it was obvious that the visitors had a breathtakingly different vision of how the young sport might be played.

Everyone has heard the myths. That a reporter, possibly from the Daily Mail, used a phrase to describe the New Zealanders’ expansive running game, “the All Backs” which a harried type-setter on Fleet Street – imagine the noise, the street bustle, the unfamiliarity of the phraseology – heard as All-Blacks.

And so a cult and a brand was born.Or that when another sports agency heard the score – Devon 4 New Zealand 55 – they breezily assumed someone had sent in the score arse-ways and corrected it. But no. The pioneers would establish New Zealand as rugby’s indomitable force on that long tour, scoring a total of 976 points and coughing up a measly 59.

By the time they arrived in Ireland in late November, they were the talk of both sides of the Irish Sea. The reception in Dublin was cordial: both teams spent a night at the theatre together with the seating arranged so that the competitors could get to know one another before the Test match.

The game itself just confirmed for the Irish crowd everything that had been heard. 12,000 crowded into Lansdowne Road. The light was poor. Viscount Walter Long and Lord Grenfell, commander of the forces, greeted the athletes on a dais that had been erected near the Wanderers touchline. Nobody knew it then but this was the last of the golden autumns for the empire. World War One was still a good 10 years into the future.

The only dampener was that Dave Gallaher, New Zealand’s electrifying fullback, was ruled out. Dr M Burke Savage had called around to the Imperial Hotel on Friday night to find Gallaher in his bed with a leg still inflamed and bruised after the game against Wales. His absence didn’t matter once the game started. Ireland’s defence held firm for half an hour but even with the splendidly named Hercules Knox in the pack, they couldn’t manufacture a score. The ‘colonials’ had too much.

“Their judgement, alertness and combination were really wonderful,” was the assessment in The Irish Times. “Every man was in the right place and took and gave his passes correctly while still going at top speed. Their tackling, too, was hard and clean. In all branches of the game they have arrived at that stage of perfection when everything is made to look simple and easy.

“Behind the scrimmage they have four lines of offence of defence, as the case demands, one half back (and wing forward), two five-eighths, three-three quarters and a full back. It is noteworthy that this formation is in the shape of a fan with the handle at the scrum. Now whether the backs be wanted for offence or defence, they move together, always keeping the side of the fan to whatever side the ball comes. Moreover, they move at a pretty sharp pace.”

It took a full two decades for the poignancy of the occasion to register. Gallaher, born in Ramelton in Donegal, left Ireland for New Zealand as five-year-old. His profile as New Zealand All Blacks captain – he co-authored the seminal ‘Complete Rugby Footballer’ a year after retiring – gave him a folkloric status. When the Great War started, Gallaher quickly enlisted even though his age rendered him exempt. He was killed at Passchendale on October 3rd, 1917.

It wasn’t until 2005 that the Irish began to understand just important Gallaher remains in the psyche of New Zealand rugby. The All Blacks visited Ireland that autumn, with tensions still high after the tackle that had left Brian O’Driscoll out of the Lions series that summer. A good half dozen of the touring players made the long midweek trip to Ramelton on a drizzly afternoon, meeting the locals and visiting the townhouse where Gallaher had been born.

Tana Umaga, the visiting captain and the player who had been involved in the controversial tackle on O’Driscoll, stood up in the parish hall and spoke of his trepidation about the visit. “I kinda had a feeling it would involve a lot of rocks being thrown my way. I’m glad I was proven wrong.”

In fact, the New Zealand bus was still in Donegal hours after its scheduled departure time. It became obvious over the day that this was a genuine pilgrimage.

“I was quite overwhelmed,” said Brian Lochore that evening. “It has meant an enormous amount – he is the founder All Black – a leader, a great soldier, he is what we all aspire to be.”

Gallaher was an enigma: Irish born but a New Zealander to the core; one of the most distinguished sons in that country’s history but also just one of the estimated 10 million military personnel killed and remembered during last Sunday’s moving centenary celebrations across the world.

His birth place has meant there is a natural affinity between the rugby cultures of both countries. But that didn’t change the prevailing dynamic in rugby games between the two: the Irish desperately striving for respect if not a result and the New Zealanders imperious and invariably finding a way to win, sometimes by a little, often by a lot. After that very first match in 1905, the conclusion was that Ireland had met “a team more scientific, less hesitating than themselves, in perfect harmony and taking every opportunity that came their way.”

It was a prophetic description of New Zealand rugby for the decades ahead. In fact, over a century would pass before another New Zealander, Joe Schmidt, would enhance his Irish international sides with those same qualities and the balance of power finally shifted – at least for one game.