Ireland head coach Joe Schmidt says it would be a “huge feather in the players’ caps” to beat New Zealand, something Ireland have managed only once in 30 attempts. 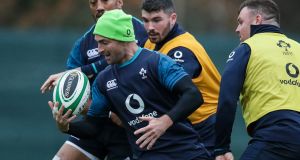 As befits the reigning Grand Slam champions and the second best team in the world currently, no Irish team has been more consistent over a three-game or five-year period against the almighty All Blacks.

Joe Schmidt has been overseeing the Irish team in this period, and in between two highly competitive defeats, by margins of two and 12 points, there was that long overdue breakthrough win by 11 points in Chicago.

Yet the fear factor remains, and not least for Ireland’s Kiwi coach.

“The All Blacks are the team that can put the most points on you in the shortest space of time. We’ve seen that in the not too distant past.”

Noting the three close encounters, Schmidt added: “There hasn’t ever been those big scores but you fear that it could be, just because I’m a realist about the number of variables we don’t control.”

“What I do know is the players will give their utmost to ensure that doesn’t happen and they’re going to roll their sleeves up and work as hard as they can  to put us in a strong position and to limit the opportunities that the All Blacks get.”

Schmidt maintained “there were some tough decisions” in a selection which had been conveyed to the players only yesterday, two days later than usual.

For his part, Steve Hansen agreed that retaining the same team save for Ryan Crotty replacing the injured Sonny Bill Williams, with Anton Lienert-Brown promoted to the bench, was not the toughest selection of his time as All Blacks commander in chief.

“It’s good that everyone was available bar Sonny,” said Hansen. “It’s a good opportunity to get a good bit of continuity.”

Aaron Smith will eclipse Justin Marshall as New Zealand’s most capped scrum-half by winning his 82nd cap, and the Brodie Retallick-Sam Whitelock combination will eclipse the New Zealand second-row record previously held by Ian Jones and Robin Brooke by starting their 50th Test together.

There had been some speculation that Damian Mackenzie might have been kept in reserve off the bench, with Ben Smith switching to ‘15’, in light of the fullback’s difficulties under the high ball. But not only did he kick and chase superbly, it lashed rain at Twickenham, and Mackenzie’s lethal footwork, pace and offloading gives these All Blacks a potent counter-attacking game and a second playmaker. One ventures Ireland would have been quite happy to see him on the bench.

Hansen hailed Ireland’s ability to “hang on to the ball for long periods of time. They’re probably the team in world rugby that hang on to the ball the most. When they don’t get what they want with that they’ll take to the air and they’ve got a good kicking game”.

“You’ve got to admire all of that. It’s winning and they’ll punish you. They’ll find a weakness. He’s pretty good, Joe, at finding a trick or two so we’ll be expecting one or two coming our way on Saturday.”

Any old win will do against the All Blacks. I’ll take 3-0

Yet Schmidt maintained it won’t be easy to spring too many surprises.

“I guess we’ll find out on Saturday. I’m not sure we’ve cooked up many surprises but you’d certainly love to be able to create a little bit of time and space somewhere because it looks like there’s a massive, green rectangle there but with 15 incredibly athletic, incredibly competitive men on the opposition, it’s still very hard to find a lot of space.

“So, we’re going to have to be a little bit clever. We’re going to have to be quick to make sure that the accuracy of what we do is spot on, and I don’t think it was great last week. You can’t give excuses for that. You can explain a couple of reasons like having limited time together but, really, it’s a results-driven industry.

“You’ve got to get the result at the end of the day and I suppose one of the negatives of climbing your way up the rankings is that I think expectations change and it’s not enough to win.

“The one exception, maybe two or three exceptions, in world rugby” he said, correcting himself with no doubt the Six Nations opener at home to England in mind, “is any old win will do against the All Blacks. I’ll take 3-0.”

Nor will the outcome of this match influence his impending decision to stay or go after the next World Cup.

“I don’t think it will sway any decision-making at all,” said Schmidt, noting that “the year still revolves more around the Six Nations than anything else.

“This is an exciting week,” Schmidt said, in preparing for what the All Blacks will come up with tactically and how Ireland can adjust accordingly.

“That is the full focus of my thinking. I’d say I haven’t really thought about it [his future] too much, which is great. I don’t really want to think about it to be honest.”