Ireland poised to extend proud home record against the Pumas 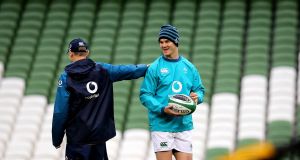 Then, outside of World Cups, although fuelled by them, Ireland–Argentina generally featured spiteful and often dull arm-wrestles. For better or for worse, the heat has been taken out of the rivalry in latter years, and the rugby matches have been considerably more open.

Ireland have certainly been taught to respect Argentina in the professional era. A 3-1 head-to-head record in World Cups will do that.

The Pumas’ 43-20 quarter-final victory over Ireland in 2015 also still resonates, and particularly drives Joe Schmidt, even if only six of the Irish 23 that night survive, and nine of Argentina’s match-day squad.

The Pumas of recent times are living proof that a country’s national team can completely reinvent itself. Allowing for the World Cup crew of 2007, when ‘El Mago’ Juan Martin Hernandez, Felipe Contepomi et al were in their pomp, where once the Pumas were synonymous with a potent scrum, driving maul, one-off runners and a slow tempo game, now they are renowned for their inventive running game.

Where once they were famed for a production of props, now they have a conveyor belt of outside backs, as well as athletic ball-carrying forwards.

Three years ago in Cardiff, Ireland were shredded out wide by Santiago Cordero, now at Exeter, Joaquim Tuculet (recovering from an ACL injury) and the Racing-based Juan Imhoff. So be it.

The current Pumas outside trio of full-back Emiliano Boffelli and wingers Bautista Delguy and Ramiro Moyano carry very much the same threat. Each scored three tries in the Rugby Championship.

As Brian O’Driscoll notes, the width with which the Pumas play means they will be a serious threat to an Irish defence which can sometimes become too narrow, and their counter-attacking also means they will severely test Ireland’s kicking game, and especially the box kicking of Kieran Marmion.

By contrast, their once-famed scrum has become an Achilles heel, so much so that it only achieved an 80 per cent success rate on its own ball in the Rugby Championship.

“I think we’ve been struggling for the last couple of years,” admitted head coach Mario Ledesma, who accepts that the Pumas’ scrum has to be revived.

In this he cited how Tadhg Furlong has gone from being “not very good” at the 2015 World Cup to being “the best [tight-head] in the world.”

The Irish scrum he added “won’t push you 20 metres, but with the All Blacks they are the best scrum technically, by a mile”.

Ledesma, who shared a beer with Schmidt, his one-time Clermont assistant coach, on Thursday, also made another s significant decision when promoting Pablo Matera to captain. Quick, strong and wonderfully athletic, Matera is also only the second Pumas’ back-rower to reach 50 caps, and all by the age of 25.

“When you talk to him he says what he thinks and he does what he thinks. That’s a really good quality today. You don’t see people running around being authentic and true and trying to live true moments. Then obviously excellent clarity on the field, effort, sacrifice, physicality, he has a lot of qualities as a rugby player and as a person. He’ll be a captain for many years.”

Alongside Matera, the inclusion of a third lock, Guido Petti, in the Pumas’ back-row for the first time in his career, is perhaps a means of beefing up their pack, and might suggest they are placing a heavy emphasis on their lineout and maul, although Schmidt expects them to mix it up, and play “with a very rapid tempo”.

“I think they’ll want to involve their back three, because they know that the more touches their back three get the more likely they are to break teams open, because they’re tackle breakers, they’re line breakers and they link up in behind the line really effectively once they break the line, and Nicolás Sánchez is a weapon there as well.”

Indeed, aside from being their creator-in-chief, Sánchez brings his own running threat, as evidenced by four tries in the Rugby Championship.

Of course, with Jordan Larmour aboard for his full home debut – which he has set up rather nicely – Ireland have tasty outside backs of their own.

“No fear of failure,” said Ledesma of the two back-threes, and hence his hope, after drawing the short straw yesterday afternoon and bemoaning the Irish climate, that the weather allows for an open game.

The Bundee Aki-Robbie Henshaw midfield also gives Ireland plenty of ballast, albeit they’ll need to be on the money defensively, and Johnny Sexton’s decision-making and goal-kicking should give Ireland another edge.

But the battle lines will be drawn up front, and it is here, not least at scrum time, where Ireland have the edge, in tandem with their work at the breakdown.

And for all the grief Irish sides have suffered at the hands of the dastardly Pumas in World Cups, they have accumulated eight wins from eight games in Dublin. They’ve also won nine in a row at the Aviva, and look well primed to make that ten.