Ireland v New Zealand: all you need to know 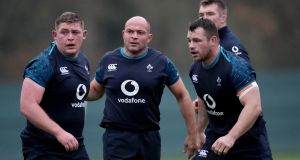 The waiting is nearly over. On Saturday night the rugby fixture of the year takes place, as Ireland welcome the All Blacks to the Aviva Stadium.

It is a meeting of the world’s first and second ranked sides - the back-to-back world champions and the most likely challengers to their throne in next year’s Rugby World Cup.

For Ireland, things have never been rosier. Joe Schmidt has masterminded a Six Nations Grand Slam and series win away to Australia in the same calendar year.

With a squad blessed with firebrand youth, experience and strength-in-depth - added to Leinster’s dominance domestically and in Europe - Irish rugby is in a pretty good place.

But now, it’s time for the acid test.

New Zealand arrive in Dublin on the back of a narrow 16-15 win England at Twickenham, with Eddie Jones’s side a contentious disallowed try away from securing the result of the autumn.

Coupled with South Africa’s 36-34 Rugby Championship win in Wellington in September, there is a sense Steve Hansen’s tourists could be slightly vulnerable, if only by their own lofty standards.

It will take the performance of a lifetime for Ireland to conquer the famous All Blacks on home soil for the first time - but it is unlikely they will ever have a better chance.

Here is everything you need to know before the world’s two best teams walk out under the Lansdowne Road floodlights.

Ireland take on the All Blacks in the headline fixture of the November series.

The game is a 7.0pm kick-off on Saturday November 17th.

The match is being televised live on RTÉ 2 (coverage starts at 6.0pm) and Channel 4. You can also follow it on the Irish Times liveblog - live from the Aviva Stadium - from 6.0pm.

Saturday’s Test is, unsurprisingly, a sell-out.

Who are Ireland’s potential immortals?

There will be no surprise comeback for Conor Murray, meaning Kieran Marmion retains the number nine jersey.

And the All Blacks?

Steve Hansen has made a solitary change from the XV who edged England - an injury to Sonny Bill Williams has ruled him out, with Ryan Crotty slotting in at 12. Not a bad replacement to have. Anton Lienert-Brown is named on the bench.

Scrumhalf Murray had been touted to make a shock return from a neck injury on Saturday, having not played any rugby since the summer tour Down Under. However, he hasn’t linked up with the Ireland squad this week - meaning he can’t renew his rivalry with Aaron Smith, with the pair widely accepted as the best nines in the business.

Meanwhile there will be no Sam Cane for the All Blacks, after he suffered a broken neck during his side’s 32-30 win over the Springboks last month. The number seven courted controversy on his last visit to Dublin, with a tackle on Robbie Henshaw seeing the Irish centre stretchered from the pitch with a head injury.

Wayne Barnes takes charge on Saturday night - an appointment unlikely to fill either side with confidence. Ireland have won five and lost 10 of the 15 games he has reffed, while the All Blacks still have lingering memories of their 20-18 defeat to France in the 2007 Rugby World Cup semi-final, for which the English official came under scrutiny.

This will be the 31st meeting of a one-sided relationship - with the All Blacks having won 28 of the previous 30 encounters. Ireland managed a 10-10 draw at Lansdowne Road in 1973, before they were agonisingly denied a famous victory in 2013, Ryan Crotty’s last minute try giving the tourists a 24-22 win at the Aviva Stadium.

However, Ireland finally lifted the monkey off their back in 2016. . .

The heroes of Soldier Field

One of the most famous victories in Irish rugby history came in Chicago on November 5th 2016, as Schmidt’s side dazzled their way to a 40-29 victory over the world champions. Ireland ran in five tries during a performance for the ages, admittedly taking advantage of the absence of New Zealand’s secondrow powerhouses Brodie Retallick and Sam Whitelock.

Ireland’s win led to brutal retribution in Dublin weeks later, as the All Blacks took a gruelling Test 21-9. Two years on, there are scores to settle on both sides.

While this fixture deserves to stand alone in its own right, many are viewing it with next year’s Rugby World Cup firmly in mind. With a year to go until Japan, Ireland are 4-1 second-favourites to lift the Webb Ellis Cup behind New Zealand, who are an evens shot to secure an unprecedented three-in-a-row.

There is a long way to go before the tournament kicks off on September 20th - and a resurgent Springboks could yet throw a spanner in the works - but victory for either side would be a big statement less than a year out.

On top of the world?

This Test is a meeting of the world’s first and second sides in the IRB world rankings. New Zealand (93.58 points), will remain top ahead of Ireland (90.12) regardless of Saturday night’s result.

Saturday is set to be mild in Dublin - around 12 degrees - and also dry. In other words, perfect conditions.

Invincibles? We’ll see about that. . .

We’re only bothered about the World Cup, anyway. . .