Ireland have achieved their highest ever world ranking 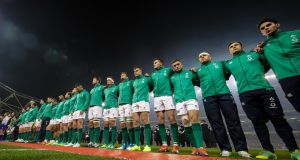 Ireland line up for the national anthem ahead of the Guinness Series clash with New Zealand. Photo: Billy Stickland/Inpho

Following the win against the All Blacks on Saturday, Joe Schmidt and his Irish team have achieved its highest ranking ever with the team continuing to push further above the 90 point mark.

While the number one spot is held by New Zealand, who retain their place as the highest ranked team, Ireland’s first ever home win over the All Blacks has bumped them up the table to close the gap to just 1.37 ranking points.

Saturday’s win in Dublin earned Ireland 1.05 points, while the All Blacks came down from 93.58 points to 92.54 points. That means Ireland’s current points total of 91.17 is their highest ever.

If Ireland beat the USA on Saturday and beat England in Dublin in their Six Nations opener in February they will go to number one in the world for the first time.

Schmidt led his team past the 90-point mark for the first time last June on the back of a series success in Australia. Ireland have now won 17 of the last 18 Test matches since March 2017 and gained 7.99 rating points during that time.

Although Ireland are considered by many to be the best team in the world right now, they have never been ranked the number one team in the world. New Zealand have been the most consistently ranked side since the introduction of IRB World Rankings in 2003, having held the top position for the last 469 consecutive weeks. They have been the top team for 85 per cent of the time that the rankings have existed while South Africa and England make up the remainder.

Ireland’s high watermark coincides with the USA’s elevation following their 31-5 win over Romania in Bucharest. That win lifts the Eagles, who play Ireland this weekend, to their highest ever ranking of 13th in the world following a tremendous year in which they have won all nine of their 2018 Tests. They are now higher than the 14th ranked Conor O’Shea coached Italian side.

The point system is calculated using a ‘Points Exchange’ system, in which sides receive points from each other on the basis of match results. The matches are weighted according to status, strength, home advantage etc.