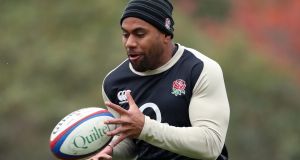 Bath winger Joe Cokanasiga: he will make his England debut against Japan at Twickenham on Saturday. Photograph: Adam Davy/PA Wire

Joe Cokanasiga will make his England debut on Saturday as one of 11 new faces brought into Eddie Jones’s side to face Japan. The Fiji-born 21-year-old comes in on the right wing, with Jones ringing the changes despite pledging to field his strongest team.

The co-captains Owen Farrell and Dylan Hartley are among the frontline players omitted – both are on the bench – with George Ford taking over as skipper. The four survivors from the defeat by New Zealand are Elliot Daly, Chris Ashton, Mark Wilson and Maro Itoje, with Zach Mercer coming in at No 8 to make his first England start.

Only Daly remains in the same jersey as last week, with Jamie George, Harry Williams, Charlie Ewels, Courtney Lawes, Danny Care and Alex Lozowski all making their first starts of the autumn, while Jack Nowell gets the nod at outside-centre and Alec Hepburn returns as loosehead.

The 19-year-old Worcester back-row Ted Hill, named as an apprentice in Jones’s squad, is on the bench and in line for a debut.

“Japan is an important game for us as we want to get back to winning ways,” said Jones. “We have also tested ourselves in having a shorter preparation. We gave the players two days off after three weeks of intensive work. We have had a short preparation but a good preparation.”

Cokanasiga’s selection is no surprise considering the form he has shown this season since his summer move to Bath. At 6ft 4in and nearly 18 stone, he provides the hulking size Jones has wanted to introduce into his backline, and the news of his first cap comes on his 21st birthday. He has been on Jones’s radar for a while, having been taken on the 2017 tour of Argentina, but this is his first involvement in a matchday squad.

Ford, meanwhile, captains England on his own for the first time – he has undertaken the role in a shared capacity with Chris Robshaw before – as Hartley is named among the replacements for only the second time under Jones.

The decision to make so many changes makes obvious sense, with Jones attempting to mirror his side’s short turnaround between their first and second World Cup pool matches against Tonga and the USA next year. As a result Jonny May, Ben Youngs, Ben Te’o and Brad Shields all miss out on the 23-man squad, with Lawes replacing the latter at blindside flanker. Richard Wigglesworth is set for a first appearance of the autumn from the bench.

Jones added: “This weekend is a good opportunity for us to test the depth of the squad. A number of players have changed their roles going from finishers to starters and starters to finishers, so that is the essential change to the squad. It is exciting to be able to give starting opportunities to Zach Mercer and Joe Cokanasiga and young Ted Hill on the bench.”

Meanwhile, the Leicester full-back Jonah Holmes will make his debut for Wales against Tonga on Saturday having made just nine starts in the Premiership and Europe for the Tigers.

The 26-year-old joined Leicester last year after spending five seasons with Yorkshire Carnegie in the Championship as the Wales head coach Warren Gatland again shows his willingness to take a punt on a player.

Gatland has made 14 changes from the side that defeated Australia last weekend, not that he will be assuming victory against Tonga who kept Wales scoreless in the second-half on their last visit to Cardiff in losing 17-7.

Liam Williams returns to the wing for his 50th cap, Dan Biggar starts at outside-half, with the fit again Rhys Patchell on the bench and Ellis Jenkins leads the side from wing forward, part of a pack that shares 74 caps.

Gatland said: “We know it will be a tough, physical challenge against Tonga who had a good win last weekend against the French Barbarians. What we are looking for is players to put their hands up for the final match [against South Africa] and put pressure on those who started last weekend.”