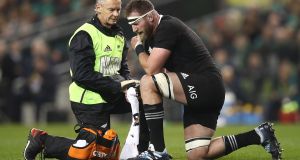 The All Blacks’ Kieran Read receives medical treatment after 35 minutes against Ireland at the Aviva Stadium. The aristocrats knew by then the scale of the battle they faced. Photograph: Phil Walter/Getty Images

A game of ghosts and a night on absolute fire.

New Zealand rugby teams have been pitching tent in Ireland for 113 years off and on and it’s always been a one way story. Always their turn to say, “hard luck mate”.

There have been days, in the not too distant past, when All-Blacks teams trampled over the best that Ireland had to offer with such crushing power and splendour that they left the locals bereft and in a lost place.

Ireland’s one shining hour against New Zealand occurred two years against the strange backdrop of Soldier Field in Chicago; a gift for the emigrants.

So there was always going to be an obligation on this seriously good and tough-minded Irish crew to right the hurts of a previous century on the field where Kyle and Gibson ran with finesse, where Mick Galwey dragged England – Remainers or Leavers be damned – over the line and where Willie Duggan would stub his cigarette with his boots before going out to face the music.

At home, in other words, here in Lansdowne where its seven o’clock on Saturday, Beauden Barrett floating a drop kick through the night and it’s all swirling, all of those defeats and that All-Black aura and Ireland’s surging talent and belief and the whole messy century of rugby history between these countries locked into 80 unforgettable minutes that stand alone.

Where was the best of it?

Among the glittering fragments: Peter O’Mahony’s late grab on a bouncing ball to snatch what would have been a clean dash to the line for Ben Smith. The bone-shuddering tackle by Devin Toner on Brodie Retallick 13 minutes in. Jacob Stockdale’s ridiculously smooth chip-and-dash for one of those Irish tries that instantly registered as transcendent.

Or maybe that brief respite from the fury 35 minutes in, Ireland deep in the New Zealand 22: Kieran Read is genuflecting on one knee as a medic tests his shoulder and arm. The big man is grimacing and breathing hard. That’s what happens when you wallop into Peter O’Mahony. Read is thinking fast, too. The aristocrats know they’re in a battle here. And around the shadows of the stadium, a low rumble rises into something close to impatience.

The Irish supporters want the New Zealanders to get on with it. For the previous half hour, they have watched their team take this game to the world champions. They’ve seen Cian Healy and CJ Stander crash home under the posts only for Ardie Savea to prevent the grounding.

A minute later, Rob Kearney, coming late onto an opportunistic cross-kick by Jonny Sexton – Wayne Barnes has already signalled an Irish penalty –and coming tantalizingly close to touching down.

Rory Best spoke about it during the week. It can be lip service, of course, the captain doffing his cap to the paying supporters on the week of a big international. But Lansdowne games have always responded to the voltage of its patrons and on Saturday night, as mighty New Zealand wobbled, the noise was as never before.

The previous half hour had done much to answer the questions that floated through the rugby citadels of Ireland throughout the week. Over the past few seasons, Ireland had moved from the darker recesses of the New Zealand rugby imagination to materialise as substantial challengers to their crown: the number two ranked team in the world.

It was a statistic repeated over and over on the radio and on the television and in print all week; it became a mantra, a source of comfort. What would it mean here, as the teams locked horns and every pub in the country was jam-packed? The truth was: nobody had a clue.

Still, the people who got tickets for this had decided to make their voices count. In the hours before kick-off, you got a sense of what this old rugby suburb might bring to a marquee World Cup game. Everything felt perfect.

The script used to demand that these November showdowns against the gods of the Southern Hemisphere take place in bitter cold weather against a back ground of mist and wild skies so that the whole thing would feel and look druidic.

But for this occasion, the weather was sublime – a big moon over the Lansdowne streets, dry leaves rustling underfoot and the night lit with anticipation. The local supporters were happy and confident. It may only have been a challenge, a deep-autumn ‘friendly’ to bookend rugby union’s already manic calendar schedule. But it felt like something weightier. It felt like a key hour in the Joe Schmidt era.

So when TJ Perena stepped into New Zealand’s arrowhead haka formation to lead the chant, the crowd was hot-wired into the theatre of it. The haka is both a sacred part of New Zealand’s rugby culture and a brilliantly choreographed television show. The opposing team has little option but to stand and observe. And for the moments when Perena’s was the only voice involved, the stadium fell quiet. Now the Irish crowd rose, filling the silence with a huge, primal roar.

On television, Donal Lenihan, an Irish player who toiled when rugby held a less prominent place in the national imagination, was transported as commentator; if you want to know what being there felt like, you just have to listen to the Cork man’s voice. Pride unconfined.

This was, of course, on one level, an entertainment: a professional sports event perfectly timed for Saturday night revelry. But the sight of Peter O’Mahony leaving the field, battered and indomitable, far exceeded the contractual demands of professionalism.

Being professional demands payment for services rendered well. It doesn’t ask you to leave a piece of your soul out there on the work shop floor.

Many Irish teams have done that in the pass with no return against the All-Blacks. Schmidt’s generation have learned to put all the pieces together.

Afterwards, the New Zealanders could not have been classier in their salutes and you could sense their minds already turning to if and when there is a rematch in Japan, with the prize of Webb Ellis cup at stake.

“Who do Ireland see as their main challengers?” mused Steve Hansen with dark mischief when the question was put to him.

“They are the favourites! Well, we’ll be one. England’ll be another one…”

They will. What happened on Lansdowne may have little bearing on a tournament that is almost a year away. Joe Schmidt’s a schoolteacher at heart; when Ireland gets excited, he knows how to quiet the class.

It was what it was: a perfect note on which to sign off a stunning year for this Irish team. And a silver fern in the cap, at long, long last. Schmidt must be due some down time soon. They should really get in him to sort out Brexit.