O’Mahony’s finest hour as he attends to unfinished business 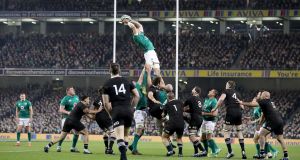 Peter O’Mahony claims a lineout. He took the game to New Zealand at every turn during the historic night at the Aviva Stadium. Photograph: Dan Sheridan/Inpho

We can’t hear him because the Fields of Athenry reverberates around the stadium where Ireland have just toppled the world champions in what New Zealand had targeted as their best performance of 2018.

That honour belongs to the 29-year-old Munster captain and joint leader of this unflinching group of high-achievers.

The same largely unknown kid who instigated an unholy war with Wallabies on a torrid Limerick night in 2010. He who dished out punishment to American and Canadian brawlers, when no one else had the stomach, during the largely unseen 2013 summer tour.

Same young man who showed unreal resolve when sitting before the media, beside a visibly shaking Rassie Erasmus, in October 2016 as everyone mourned Anthony Foley’s tragic passing.

O’Mahony is a leader by deed. Really, he’s just a decent skin who’s dragged almost impossible rugby feats from a frame that is smaller that most of his direct opponents.

Plenty of water under the bridge and too many surgeries, his closed eyes for Amhrán na bhFiann reminded regular observers that he had unfinished business with these All Blacks.

Captain of the British and Irish Lions for the first Test in 2017, only to be removed from Warren Gatland’s match-day squad a week later, here followed an hour of individual atonement.

And, for a change, the flanker could celebrate. Briefly. His full-time leap for joy was instantly curtailed by the injuries he had sustained. He, literally, blocked out the pain for 63 minutes, not so much playing rugby, but hunting the ball because in latter years he’s learned the value of ignoring the conflict.

O’Mahony will still fight you if you want. But back in 2014, when Thomond Park was sacked by Clermont Auvergne, O’Mahony refused to accept secondary status and was brutally punished when Fritz Lee whipped the red jersey over his eyes to land two awful haymakers. The cameras and officials missed it. He shook himself and soldiered on.

Everyone witnessed the late belts here as he stole New Zealand possession on this, perhaps his greatest moment.

“Pete played absolutely immense today,” said Devin Toner. “He is a true leader. Bestie, him, Sexto – the trio of them, the way they lead the team is unbelievable.”

O’Mahony and punishment are bedfellows to such an extent that the IRFU had to ignore his injury profile when awarding a primary national contract only days before last Christmas.

But the negotiation spilled into the public domain when O’Mahony, in search of his true value, felt compelled to speak out the week of a massive European game. He clearly hated doing that, to be playing any sort of media game, but it needed saying.

David Nucifora saw the looming PR disaster, just in time, before letting a Munster servant – held in the same regard as Ronan O’Gara, Foley and Paul O’Connell – sign with a foreign club.

O’Mahony doesn’t lead by words. The interval became an operation to send him back into the fray.

“He was beaten up in that first 40,” Joe Schmidt confirmed. “What an absolute warrior. So no talking, he was just sucking air. He had a bit of a dead leg, so he was just trying to keep that moving, because if that seizes up he’s not going to be able to run. So he was just trying to get himself to get into the best possible position to continue for us in the second half.”

Jacob Stockdale’s try belongs to O’Mahony as much as the Ulster winger. Honestly, it does. Who won the penalty that allowed Sexton punch play down the touch line? Who got up after being hit by Sam Whitelock and Owen Franks? Who looked down upon them while hauling Rory Best from beneath the bodies? Who won the resulting lineout despite Kieran Read’s valiant leap?

“Yeah, Pete was huge,” Schmidt continued. “That goalkeeper’s save when Beauden Barrett chipped through and his ability over the ball.”

The snaffling of Barrett’s grubber on the hour mark saved Ireland by denying Ben Smith a certain try. It kept the lead at 10 points. Three minutes later his game was ended by more technical brilliance to get over Ofa Tuungafasi grounded frame as New Zealand crept 10 metres short of the try line.

He was done. His left leg locked up like he had been doing over the ball. All night it was his ball. This game will always belong to Peter O’Mahony.