Neck strain ruled Dan Leavy out of All Blacks win 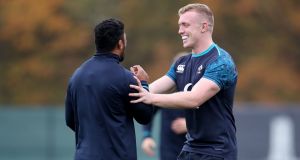 Ireland’s Dan Leavy with Bundee Aki during training ahead of the Guinness Series win over the All Blacks. Photo: Dan Sheridan/Inpho

Ireland are set to heavily rotate their squad for next Saturday’s Guinness Series finale against the USA at the Aviva Stadium (kick-off 6.30pm) and to that end released seven players from the squad to return to their provinces.

Sean Cronin, Jack McGrath, Rob Kearney, James Ryan, Jordan Larmour, Dan Leavy and Kieran Marmion have re-joined their provinces, although it’s unlikely any of them will play this weekend, with Leavy’s rehabilitation to be managed at Leinster after the IRFU confirmed that the injury which ruled him out of last Saturday’s momentous 16-9 win over the All Blacks is a neck strain.

Furthermore, Peter O’Mahony suffered a dead leg and according to the IRFU “his training load will be managed accordingly.” But it would be a major surprise if he or others who were integral parts of the wins over Argentina and New Zealand, such as Rory Best, Tadhg Furlong, Devin Toner, CJ Stander, Johnny Sexton, Bundee Aki and Jacob Stockdale will involved against the USA. Aki and Stockdale have started all three games to date.

That said, save for the aforementioned seven, O’Mahony, Sean O’Brien and Robbie Henshaw, the remaining 33 players named in the original squad of 43 remain in the squad’s Carton House base.

It seems likely therefore that Niall Scannell, who started in Chicago against Italy, David Kilcoyne, Finlay Bealham (both of whom have only seen bench duty in that game so far) and John Ryan will be involved, along with locks Iain Henderson, Tadhg Beirne and Quinn Roux, and Rhys Ruddock, Jack Conan, Jordi Murphy and Josh van der Flier the back-rowers.

The half-backs in the match-day squad are likely to feature John Cooney, Luke McGrath, Joey Carbery and Ross Byrne, while perhaps the likes of Stuart McCloskey, Will Addison, Darren Sweetnam and Andrew Conway will feature as well.

It’s testimony to the team’s success and popularity that even before last Saturay’s heroics, this game has been a sell-out for weeks.

1 Cam Newton broke the mould: Can his flame be rekindled at the Patriots?
2 Pete Sampras: The forgotten great with the best serve in the business
3 The Game Changers: Vincent O’Brien, a pioneer who took Irish racing to the world
4 The unsolved mystery of Goran Ivanisevic’s stunning Wimbledon win
5 Tipping Point: DeChambeau’s transformation raises questions, but who will ask them?
Real news has value SUBSCRIBE