The Offload: Schmidt, Hansen and the pre-game envelope 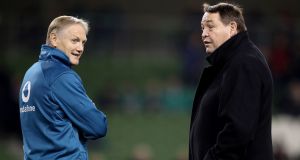 Pre-game. Aviva Stadium. As the tracksuited Joe Schmidt strides on to the Lansdowne field the black-suited Steve Hansen hands over an envelope. Brain overload temporarily ensues. There is a fable about Joseph Stalin leaving two letters in the drawer for Nikita Khrushchev.

“Niki, do not open the first one until events take a turn for the worse. The second letter should only be read when you run out of answers to your problems.”

Before the “Schmidt to be crowned All Blacks coach” story could be penned, we did some investigative journalism.

“That was €760,” said Hansen. “He was the only bloke I could buy some tickets off. When you buy them you got to pay for them. Thought I’d get it out of the way early.

“The one thing I know about being head coach is when you win you get all the credit and when you lose you get smacked a bit. You don’t do it unless you got a great team around you.”

“Steve rang me about six months ago,” Schmidt confirmed of the tickets. “I still got [the money] in my pocket.”

Joe pats himself down. “S**t, where is it?! Which journalist was closest to me?”

When the media are scrambling for cover you know the good times are flowing. Of course, nothing lasts. Let’s join the dots. After 14 years on the All Black coaching ticket, Hansen is about to make an announcement about his future. Both men’s contract end after Japan 2019.

“My family had a good chat about it over the summer,” said Schmidt. “We will confirm things one way or the other.”

“This game will dictate who is the best 10 in the world at the moment.”

The Dan Leavy story was completely overshadowed by the weekend’s rugby but Friday’s withdrawal of the openside from the Ireland team to play New Zealand cannot be ignored because Leavy, not the Ireland management it seems, didn’t reveal the nature of his injury. This follows Jamie Heaslip in March 2017 and Conor Murray more recently requesting that Leinster and Munster coaches do not release information on their back and neck problems.

For the record, the media do not care about player injuries but the public at large keep wondering. That makes it news. So it is reported.

“This is the new paradigm we’re living in, GDPR,” said an IRFU spokesman. “You guys probably haven’t had the same exposure to this as we have here, there is a general movement amongst the players controlling their own information.”

So, not releasing the injury information was Leavy’s decision? “That is the information I have. We are getting more and more used to this.”

This column cannot find a similar “players movement” occurring anywhere outside of Ireland, nor do we know the nub of the issue, because silence is the current policy. What we do know with certainty is a lack of clarity leads to conjecture from the public and all the problems that entails.

“I just said inside I’ve never done a press conference without being asked about James Ryan,” Toner laughed.

Hardly anybody said anything about Ryan until he captained the Ireland under-20s to victory over New Zealand in 2016. So much has happened since. Take Saturday’s 20 tackles and 17 carries.

“He doesn’t surprise me anymore because I know what he can do,” said Toner. “Because he is so special people keep expecting it from him but he keeps on stepping up. He is always there to tackle, he is always there.”

Toner refused to take full credit for that crunching tackle on Brodie Retallick. “I got the initial hit but James finished it.” Come on. “No, it was all James.”

Toner matter of factly stated 12 months ago that he would not relinquish the Ireland jersey without a fight. Right now, after this set-piece display against Retallick and Sam Whitelock, the 32-year-old looks indispensable. Tadhg Beirne and Iain Henderson appear to be scrapping for a place on the bench.

“The competition is unbelievable.”

Some people can’t cope with pressure, it makes men like Toner find another level.

1 Restrictions threaten 147 unbroken years of Irish athletics history
2 Solskjaer requires more than Sancho to mount a title tilt
3 Different Strokes: Bryson DeChambeau’s rules debates doing him no favours
4 Stirling and Balbirnie tee off to tee up another famous Ireland win over England
5 The shuttle run that will get you to your desired fitness destination
Real news has value SUBSCRIBE