Ireland now ‘the best team in the world’: the New Zealand press react 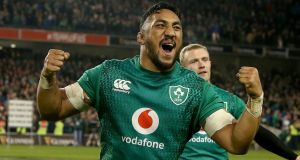 Oh, what a night.

Saturday’s absorbing encounter between Ireland and the All Blacks lived up to the hype and more, as Joe Schmidt’s side delivered a fine performance to beat the world champions 16-9 in Dublin.

Ireland’s victory was as brutal as it was well-executed, with tireless scrambled defence keeping Steve Hansen’s side at arm’s length after Jacob Stockdale’s second-half try had put daylight between the sides.

Afterwards, Hansen claimed Ireland - officially ranked second in the world rankings - are now the best team on the planet.

And that is a view echoed by parts of the Kiwi press, including Liam Napier of the NZ Herald: “Ireland are the world’s best, then,” he writes. “Certainly that is now true of 2018.

“Six Nations champions, and now having secured their first home victory over the All Blacks in history, to go alongside their maiden win two years ago, they are deserving of that mantle.”

And he points to the leadership of and meticulous planning of Joe Schmidt as one of the key reasons behind New Zealand’s second defeat of the calendar year, and first ever on Irish soil.

He writes: “Put Jacob Stockdale’s try - the only of the match - down to Schmidt identifying the All Blacks’ weak spot on the short side. The switch move from the lineout between Sexton and Bundee Aki created just enough space for Stockdale to execute the training ground blueprint.”

And Napier is not alone in his assessment of Ireland’s world standing. Richard Knowler, of Stuff.co.nz, writes: “Ireland are the unofficial kings of world rugby.

“On this performance at the Aviva Stadium in Dublin, a well-deserved 16-9 victory over the All Blacks, it would be churlish to dispute the argument that the superpower of northern hemisphere rugby now deserves to be considered the best team on the planet.”

And Knowler paid tribute to the Irish defence - masterminded by Andy Farrell, who has now kept the All Blacks scoreless with the Lions and Ireland, the only two occasions New Zealand have failed to cross the whitewash since 1995.

“Ireland were like ruthless cyborgs as they clinically followed the formula that had proved such a success for them in the Six Nations.”

Gregor Paul, also of the NZ Herald, is another hailing Ireland as the unofficial number one. From the Aviva Stadium, he writes: “Ireland can now claim to be the best team in the world after producing a stunning performance that was brave, creative and relentless. They deserved the win and with it, they deserve to be seen as world rugby’s best team even if the rankings don’t agree.”

And what makes Ireland’s victory even sweeter is the admission that the All Blacks also delivered a fine performance - even if it wasn’t quite up to their usual standards.

Paul writes: “As for the All Blacks, they were almost as good and that is something that will hurt. The word almost. It’s not normally there but the truth of things at the moment is that Ireland versus New Zealand is the great rivalry of the modern age.

“And maybe, just maybe, Ireland having won two of the last three can say they are edging it.”

Oh, what a night.