Gordon D’Arcy: Munster need to get Ben Healy to 50 caps as quick as they can 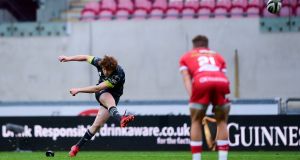 The Munster player’s positive test need not be viewed in a negative light. Training is cancelled so all the plans the coach wanted to put in place this week will be reduced to words on Microsoft Teams. If you think running an office remotely is challenging, try directing a rugby team.

‘We want to do this at scrum time . . .’ says Graham Rowntree via Zoom. ‘We need Chris Farrell to carry at this moment . . .’ says Stephen Larkham whenever the Wifi holds.

‘We want, we need’ without anyone actually doing or showing. Theory over practice is increasingly the centrepiece of preparation in 2020. Everyone must adapt.

Less time battering each other and more time seeing the space on laptops with non-contact rehearsals, because this will keep happening to large squads of men who operate at extremely close quarters (women’s club rugby in England have rewritten the laws to reduce scrums by over 75 per cent).

Evolution is speeding up.

The GAA has shut down its remaining club finals. There will be no rugby matches in schools for at least four weeks. AIL fixtures are being cancelled at a worrying rate due to outbreaks.

Any day now a huge game – be it the Champions Cup final or an Ireland Test match – will fall foul of the need to isolate an infected team. This is already happening in England with Sale Sharks and in France with Racing 92’s trip to La Rochelle called off.

Only certain risks should be taken. I’m avoiding my local village due to reports of a cluster. Just for a week or two. I had shoulder surgery Monday on an old war wound so it’s probably no harm that I remain housebound.

We should keep planning for the long term but those plans will keep changing. Rugby is the same. The pressure on Johann van Graan to field a team this Saturday at Thomond Park intensified after a senior player returned a positive test that put another six players into quarantine. A second round of testing this week will bring them up to Thursday morning so it is conceivable that they will face Edinburgh with only a captain’s run under their belt. Or nothing at all.

I wonder when the call to abandon ship needs to be made. If professional sport is to find its way through the season then these decisions will become routine. Game off. No score draw. Two points each. Nobody to blame.

When the game is interrupted by a team irresponsibly celebrating success or drowning sorrows in defeat, then those people have slipped out of the category of professional athletes. That’s the new reality. Covid is rough on the players. They are denied access to family members. Rugby, like all sports and the financial engine that drives them, is in the lap of the virus.

The old way of preparing is gone and may never return. The next job mentality is cancelled. Focus on what you can control; your body and your skills.

Anyone reliant on set-piece training will struggle, but the more we encourage players to play what they see the better the spectacle. That’s what current preparation will allow: accuracy at pace.

All the sacrifices in the world cannot help you perform in matches when under prepared but you can focus on your rate of recovery. You can adapt.

Van Graan and Munster need to reinvent themselves. They know this. They cannot prepare for Edinburgh the way they are accustomed to, so complete faith in their system and in their personnel is required.

Ben Healy’s match-winning cameo came not a moment too soon. Four ‘clutch’ kicks – each one more stressful than the previous – put his name up in lights but, analysing the match for Eir Sport, I saw something even more telling.

On 75 minutes, with the Scarlets leading 27-20, Healy shaped to kick a Munster penalty to touch. Tadhg Beirne appeared to disagree with Healy’s lineout call. Beirne was overruled; a frustrated Ireland international outranked by the 21-year-old replacement outhalf.

Sure enough, the ensuing set piece supplied quick ball for Healy who tried to slip Andrew Conway through a gap. It didn’t come off but he exuded control. I have not seen that for a while. Who knows where his career will end up but the 10 must be in charge on the pitch. Especially the Munster outhalf.

Not so long ago Leo Cullen explained the rationale behind exposing young players to the next level. He tries to hold them back for as long as possible, even if they look ready in training, because he knows all about the physical toll of Pro14 matches on a developing body. Tom Clarkson was recently rushed into the Leinster squad due to mounting injuries and unexpected departures to other provinces. The impressive 20-year-old tighthead will reappear soon enough but Cullen signed Ciarán Parker, a 25-year-old and 120kg, in order to give Clarkson the time he needs to develop.

You know a player is ready when they have 50 caps. But, as Leo said, the only way they get to 50 is by the coach picking them. When they are ready. Ready or not, Munster and Van Graan have reached this moment. He says he trusts the academy graduates and Healy is the first to repay that trust.

Currently, the team belongs to Peter O’Mahony, Conor Murray, Keith Earls and CJ Stander. If that remains the case after next summer the club’s 10-year search for silverware will be ongoing.

Craig Casey, Healy and Thomas Ahern showed real star quality playing for the Ireland under-20s. At his first real opportunity, Healy comfortably ran the show. Here is a big personality in a key position but we know next to nothing about him. He was a schools star. He looks the part. He has four caps for Munster. Let him accumulate 50 caps.

That’s over to Van Graan, with Stephen Larkham a vital figure in the background, but the choice between JJ Hanrahan and Healy will reflect Munster’s intent.

I am unable to define this Munster team but I can tell you what Connacht are all about. The way Andy Friend has them playing is clear and exciting. The way Van Graan has Munster playing is muddled and boring.

When the first box-kick went up at Parc y Scarlets I presume a large contingent changed the channel. It was inaccurate and the chase was poor. But Munster did score three impressive tries, they were resilient and they might have discovered an assassin’s right boot.

Connacht focus on ripping defences open in transition, openly stating they want to win 90 per cent of their home matches and 50 per cent away. Tom Farrell created a try for Bundee Aki but it was Bundee’s second score that makes them the most entertaining side in the Pro14.

John Porch showed a nice mix of pace and timing into the line while Alex Wooton – why did Munster let him go? – had the football intellect to reward Aki’s lung-busting support line with a lovely grubber.

That’s how Friend’s team attack and they will keep doing it. There will be bumps on the road but Friend rightly put the responsibility on his shoulders entering season three as the head coach.

Entering season four down in Limerick, Van Graan needs to back up his promise to invest in local talent.

Cruelly stripped of two world-class players – Joey Carbery and RG Snyman – the South African definitely needs some good fortune. Hanrahan and other senior players, who have been unable to take Munster to the next level, still have an important role to play, but Van Graan must not let desperation to win a trophy cloud his thinking.

The process, if done correctly, will deliver success. Put it this way: if Munster develop a distinct brand – ball in hand perhaps? – yet lose two semi-finals with a team full of men born in the province will the supporters class that as failure?

The Munster Professional Game Board have given Van Graan similar resources to what Michael Cheika demanded in the summer of 2008. In came Rocky Elsom and CJ van der Linde (who was injured more than he was fit) with Johnny Sexton and Seán O’Brien kept on a leash. When the leash came off we won the European Cup.

A lot should be demanded of Damian de Allende and Chris Farrell. Run the attack through them, especially on a week when the team is unable to gather. Also, picking Ben Healy at 10 does not require any more training sessions.