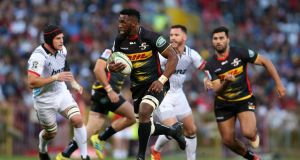 Siya Kolisi in action for the Stormers. Photograph: Shaun Roy/Getty

Leinster must be confused. For years they were told that the lack of competitiveness, and absence of relegation, in the Pro14 enabled them to prime their front-liners for European action, whereas the poor English and French clubs had to slug it out every week. This was the secret to Leinster’s success.

Now they’re being told that the very same weaknesses of the Pro14 left them ill-prepared for a European quarter-final against Saracens.

Taken in tandem with the exit of all five Pro14 teams at the quarter-final stage in Europe, the latter theory would seem to have some validity. Except that we’re basing this on just one weekend of matches in Europe, which is not exactly irrefutable evidence.

For sure, the Pro14 does not seem as competitive as it was even four or five years ago, never mind 2003-04 to 2011-12, when there were five Welsh title successes in that nine-year period.

Even prior to Leinster’s recent three-in-a-row, Glasgow were the first Scottish winners, followed by a first success for Connacht and then the Scarlets’ thrilling knock-out wins away to Leinster and Munster.

The Welsh, and particularly the Ospreys, have gone into relative decline. Long gone are the days when the Ospreys augmented their homegrown Galacticos with signings such as Jerry Collins, Marty Holah, Justin Marshall and, indeed, Tommy Bowe.

Similarly, it’s a shame for Glasgow and the Pro14 that Finn Russell and Stuart Hogg will be opposing each other in the Heineken Champions Cup final three weeks’ hence in Bristol.

True, Simon Zebo and Donnacha Ryan will also be playing for the Parisians, but compared to their celtic counterparts the retention of Ireland’s frontline players is further testimony to the IRFU’s good husbandry as well as the schools, academy and coaching structures in the provinces - Leinster especially.

At the last count, a Cardiff-based colleague reckoned there were 97 Welsh qualified players performing at professional level in England, ie the Premiership or Championship. Nor is it just a case of English clubs signing high calibre internationals such as Dan Biggar.

The Welsh are still producing plenty of talented youngsters, witness their Under-20 results, which are not too dissimilar to Ireland’s. Increasingly though, young players are being snatched up by renowned rugby-playing English schools or colleges. So it is that the Cardiff-born duo of winger Luis Rees-Zammitt and out-half Callum Sheedy are playing for Gloucester and Bristol after attending Hartbury College and Millfield School. The former is a nephew of the former Cardiff fullback Paul ‘Pablo’ Rees and while Rees-Zammitt has declared for Wales, Sheedy remains eligible for Wales though birth, England through residency and, in actual fact, Ireland through lineage.

Nor does there seem any sign of a significant Welsh revival any time soon. Due to the Covid-19 pandemic, the Welsh Rugby Union had to secure a bank loan of €22 million to bail out the four regions, each of whom now has to repay €5.5million. That said, the Scarlets are looking strong and the Dragons have made significant signings amid a trend for developing home-grown talent and repatriating players across the four regions.

Not that the relative weakness of the Pro14 prevented Leinster from conquering Europe two seasons ago and reaching the final last season. Furthermore, it didn’t stop Leinster beating Lyon and Northampton, then atop the Top 14 and Premiership, both home and away in the pool stages.

If they weren’t primed for the physicality which Saracens brought to the Aviva Stadium last Saturday week, then that was due to the four interpro derbies they played against Munster and Ulster, which suggests they are too far ahead of their local rivals as much as the others.

Besides, like most in the Premiership since the resumption, Saracens had been chopping and changing plenty themselves. It’s doubtful their games prepped them ideally for a Champions Cup quarter-final either.

What was different, and which may give some sustenance to the theory that the Pro14 did not prepare Leinster adequately, was that normally the quarter-finals arrive in the slipstream of a Six Nations, which would have had the bulk of Leinster’s squad playing at Test level for a couple of months beforehand.

Anyway, for better or for worse, it’s back on Friday with empty stadia and 8.15pm kick-offs (and circa 10.15 finishes!). This clearly shows how high newspapers rank in the Pro14’s priorities, not to mention the rows this might prompt in some households given The Late Late Show starts at 9.30pm.

For the time being it will be, effectively, a Pro12 which might mutate back into a Pro14 or even become a Pro16 before the 2020-21 season is complete. The general council of SA Rugby meets on Tuesday and according to sources in South Africa it will be a major surprise if they don’t ratify the addition of all four Super Rugby franchises, the Bulls, Lions, Sharks and Stormers, in an expanded Pro16 - the lifting of travel restrictions permitting. With the British and Irish Lions due to tour next year, they need games in the short-term, and in the longer term it has many positives.

There remain other obstacles, given the Cheetahs are prepared to take legal action against SA Rugby as they have a contract to play in the Pro14 until 2023. The Cheetahs could lose in the region of €1.5 million per annum if evicted from the competition.

It would mean yet more revised formats in this tournament’s ever-changing 20-year history, without solving the lack of away fans or the small TV audiences in some countries - for example the Leinster-Ulster final probably went unnoticed in the other participating countries.

But it would generate more TV income, competitiveness and interest.

1 Jack Nicklaus’ Trump endorsement leads to avalanche of dismay
2 World Handicap System: What is it? How does it work? Will my handicap change?
3 Return of Conor Murray’s box kicking could exploit French vulnerability
4 Centurion Cian Healy still marching to the beat of his own drum
5 All-Ireland football championship 2020: Our writers’ and pundits’ predictions
Real news has value SUBSCRIBE