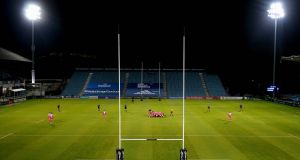 A general view of the RDS during the Guinness Pro 14 game at the RDS. Photograph: Ryan Byrne/Inpho

Barely two weeks ago, Philip Browne informed the Oireachtas Covid-19 Response Committee that Irish Rugby’s losses in 2020 due to the coronavirus pandemic were forecasted to be in excess of €30 million and if games continued to be played behind closed doors in 2021 it could threaten the existence of professional rugby in Ireland, as well as elsewhere.

However, the National Public Health Emergency Team’s (NPHET) decision to recommend that the country move to Level 5 restrictions for the next four weeks would have sent shockwaves through the sport. The relief when reports emerged that the Cabinet would impose Level 3 restrictions, with added measures, was almost audible.

Under the terms of the Government’s Living with Covid-19 plan, Level 5 guidelines stipulate that in addition to matches or events not taking place, collective training would also be banned, thereby throwing the Pro 14, the rearranged Six Nations games and the Autumn Nations Cup into total disarray.

Rugby is already playing a desperate game of catch-up to salvage something from the wreckage of 2020 as it is. The delayed and revised Pro 14 2020-21 season having just completed its first round of matches last week, the next four rounds are due to take place over the course of the next month, while Ireland’s rearranged 2020 Six Nations games against Italy and France are due to take place in the Aviva Stadium and Stade de France on October 24th and 31st.

Were Ireland, or Leinster, unable to even train, much less play, straight away this would place Irish rugby as the outliers of the European game, as it would throw the Pro 14 into chaos and leave the Six Nations incomplete indefinitely.

So stretched have the provinces been that the estimated first tranche of €5.5 million from CVC’s purchase of a 28 per cent stake in the Pro 14 has already been absorbed by the four of them.

As it is the IRFU is losing an estimated €5 million per month but were Ireland unable to complete those rescheduled Six Nations fixtures, it would immediately cost the IRFU a projected €4 million in deferred payments, as well as impacting on their broadcasting and sponsorship revenue, in addition to the estimated €4 million shortfall from having no spectators at the game.

Those financial losses would be dwarfed should Ireland not be able to fulfil its four Tests in the November/December Autumn Nations Cup. Ireland are due to host Wales in the opening match at the Aviva Stadium on November 13th.

True, it doesn’t appear as if NPHET’s recommendation will be ratified but, but a four-week lockdown in Dublin alone, or Ireland as a whole, would seriously imperil Ireland’s chances of taking part in the Nations Cup as well.

Browne also stated that a prognosis for 2021 hinged on an end of year review in December, and he could not rule out the possibility of redundancies across their wider staff of around 270 people, who have already agreed to a four-day working week and 20 per cent salary cut. Most likely, this doomsday scenario would have meant further salary cuts and even job losses among the 210 full-time and part-time players as well.

Even then, Leinster and/or the IRFU would have had a case for being granted exemption as a professional sport, not least as the financial implications would be so dire.

None of this is to take NPHET’s prevailing concerns about the spike in Covid-19 cases lightly, but rugby has being doing its damndest to fulfil all Government and health protocols. For in all of this it’s worth noting that last week the PCR testing of players and staff at Connacht, Leinster, Munster and Ulster produced zero positive results ahead of those opening round of fixtures, when the provinces recorded four wins.

To date there have been 2,228 tests conducted across the professional players and staff in each of the four provinces, with nine positive tests reported, all of them academy players.

Match days without supporters are safer than a visit to the supermarket. On foot of applying for accreditation to Pro 14 games in the Aviva or RDS, each member of the media is sent a match-day application form.

We are told: “This resource is intended to support the safe return of professional rugby matches to the RDS Arena, through information, orientation and cooperation in the fight against Covid-19.”

Before last week’s game between Leinster and the Dragons, for example, after an introduction there was a message from Michael Dawson, Leinster Rugby chief executive, and then a welcome to the RDS before modules on Covid-19 information, Covid accreditation zones and match-day clearance.

This has to be completed by 2pm the day before the game, on foot of which an additional health screen form arrives by email on the morning of the match and must be completed by 1pm to ensure access to the grounds.

On reaching the ground, a mask must be worn at all times and entry is subject to a further temperature check screening, where a reading must be below 37.8 degrees.

Once inside the grounds, exit and re-entry is not permitted, and we are obliged to stay in our designated areas, with all seating ensuring social distancing. There are seemingly as much staff as there are media and all post-match interviews with head coaches and selected players are conducted via video as they, and us, must remain in our designated areas.

Whether or not it would be easier to get into the White House, the Aviva and RDS certainly seem safer anyway.