Stockdale and Ringrose on board with expansive Irish game plan 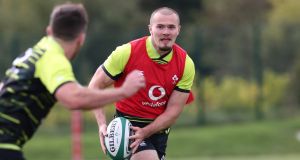 The same hymn sheet is doing the rounds in Ireland camp. “Heads up” rugby being the phrase of the week with Jacob Stockdale and Garry Ringrose empowered to be their natural selves whenever an opportunity arises.

“It’s about trying to play a brand of rugby that we all love,” said Ringrose. “That might look different at different times because it’s not necessarily about being the Harlem Globetrotters but it’s about playing to space when that’s the right thing to do but then if you’re coming up against a defence that’s set, it’s looking at where else the space is, maybe through a kick.

“It’s not necessarily one style of play being encouraged or implemented, but it’s about doing the right thing at the right time to take advantage of whatever opportunities there are.”

A typically cautious, well-rounded answer from the Leinster captain in waiting. But we keep hearing about a “heads up” game with less slavishness to rugby by numbers, and more of that stunning counter-attacking witnessed in Eden Park on Sunday morning.

The All Blacks reappeared from their particular form of isolation to unleash a new breed of super athletes, albeit with very familiar surnames. Peter Umaga Jensen is a nephew of Tana Umaga and Jerry Collins (Tupou Vaa’i is a scarier version of the late blindside) while Eroni Clarke’s son Caleb announced himself in a manner only comparable to Jonah Lomu during New Zealand’s thrilling 27-7 victory over Australia.

“He’s not much use is he?” Stockdale laughed. “He’s a guy that is an incredibly powerful athlete and a seriously dangerous player. And he is playing with that confidence of somebody who has just broken onto the scene.”

Takes one to know one.

“More than anything, it’s exciting to see somebody who kind of simplifies the game. He just says, ‘Right, well I’m just bigger, faster and stronger than a lot of people on this pitch’ and you look at that line break he made from the Australian kick down the middle of the pitch. He just goes at Nic White then just busts the tackle and makes a 50 metre break. It’s very simple stuff when you have the physical capabilities that he has.”

Stockdale will be a key figure if Andy Farrell’s Ireland rediscover the success the big Ulster left wing experienced when gliding onto the international scene in 2018. That’s presuming he is still a winger. The 15 jersey needs filling now Jordan Larmour has been ruled out for 16 weeks with a dislocated shoulder.

Anointing a resident at fullback may or may not be part of Farrell’s masterplan.

“The way the game is going you are no longer just a winger or just a fullback, you are a back three player,” said Stockdale. “It is similar enough with centres. You are expected to be able to play at 12 and 13.

“The fullback, to be honest, what I found over the last few weeks is there is no real opportunity to stop. You have to be willing to work constantly.”

Ireland are not producing the freakishly powerful young men in New Zealand’s line of succession but when Stockdale looks around training in Abbotstown there are familiar faces from his under-20s side that beat the Baby Blacks en route to the 2016 World Cup final.

“Me, Shane and Hugo all played together so it is really refreshing having those guys in. I haven’t played with them since [under-20s] so it is a fun opportunity to do that.

“Hugo’s work rate has been phenomenal. A large part of the reasons he is in is the energy and the drive that he brings to a team whenever he is playing. From watching from the outside and playing against him that’s something that has been really impressive.

“Obviously Shane has put in some fantastic performances for Munster. He is a very talented player and he played 13 on that 20s team, which shows his versatility, which I think is a sign of a really good player.

“The both of them have slipped into Irish training seamlessly.”

All this could be framed as a new era.

“I wouldn’t really over think it too much,” Ringrose countered.

“What Ireland has achieved in the past certainly sets the foundation and what we’ve done before, and what we’re hoping to do again. Ultimately, we want to get back to winning trophies. That’s the objective that everyone in here has. I wouldn’t over think it to describe is as a new era or anything, but it’s just a massive opportunity.”

Stockdale fully embraced the last question of this Microsoft Teams chore: What is achievable?

“Realistically, for us, I think it’s entirely achievable to get 10 points out of the next two games and pick up a trophy at the end of it.

“When we get into the Nations Cup, again, we’re going to aim for silverware and that is something that’s achievable. We’re feeling pretty confident in that respect.”