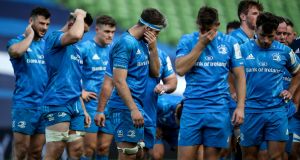 Leinster had earned themselves a gilt-edged chance for a fifth star, but they have the resources to come again. Photograph: Dan Sheridan/Inpho

There’s losing, and then there’s losing to Saracens. When you think of it, their ongoing presence in the Heineken Champions Cup is like a student being caught cheating at the Leaving Cert, having his exams disqualified, and yet still going on to Trinity or UCD.

As expected, the absence of fans allowed a typically animated Saracens something approaching home advantage with their on- and off-field noise levels. A crowd of 51,700, with scarcely 1,500 travelling fans, would have mercifully drowned that out, and no one would have heard Billy Vunipola suggest to Johnny Sexton after the late, high hit by Michael Rhodes: “You need to go for a HIA bro.”

There’s no doubting they deserved to beat Leinster and earn their place in the semi-finals and if Racing 92 lost to them in Paris next Saturday there would be a certain irony in that.

Racing, after all, let Saracens off the hook in round six when leading 24-17 against a team reduced to 14 men by the first-half sending-off of Will Skelton.

Meanwhile, Leinster and their fans, along with Ulster and the rest of the Irish rugby supporters, are left on the outside looking in. Even with empty stadiums and Level 3 and a bit, the deflation is still palpable.

This is fuelled by the thought of the television audience on Virgin Media and Channel 4 next Saturday if Leinster had been hosting Racing (with no need for private gatherings to watch the game on BT Sport).

Instead, after 25 wins and one defeat, Leinster’s season ends in relative failure and it’s time to throw the baby out with the bathwater. The Pro14 is ill-equipped to prepare them for the Anglo-French big guns. Two Anglo-French semis in the Heineken Champions Cup, and two more in the Challenge Cup, heralds a new Anglo-French hegemony. Little Irish sides can’t cope with the big English bullies. And so on.

Certainly, if a league is as strong as its weakest link, then the sight of the Ospreys and the Southern Kings propping up the two conferences are not good portents.

It’s not just that the addition of the Kings and the Cheetahs (especially on their travels) have weakened the competition. The decline of the Ospreys, poorer in every sense from the days of Marty Holah, Jerry Collins and their home grown galacticos, has been compounded by Glasgow fading after losing Finn Russell, Stuart Hogg and the Grays.

Even so, there’s always a risk in jumping to conclusions based on one European campaign. It’s only a snapshot in history. Pretty much every time an Irish side, and by extension a Pro14 team, fails to reach the knockout stages or the semi-finals we hear of an era of Anglo-French dominance.

It’s never materialised, and it didn’t happen after the 2015-16 tournament, which was the last time the Premiership and the Top 14 carved up the semi-finals (and indeed the quarter-finals). What happened next? Leinster and Munster reached the semi-finals for each of the next three seasons, with Leinster reaching two finals and winning one of them.

For sure, Leinster’s defeat, along with Ulster losing 36-8 to Toulouse, is a sobering reality check. Taken in tandem with three Irish losses against England and Saracens’ defeat of Leinster in last year’s final, there’s also a trend.

However, last Saturday’s defeat did not feel like the physical bullying in those other beatings. Yes Saracens had the better of the collisions early on last Saturday, but it was nothing like on the scale of St James’ Park when Billy Vunipola and Skelton were human wrecking balls.

In fact, with Will Connors fulfilling his brief, the Saracens eight was restricted to 22 metres from 13 carries. His most significant contribution was to take out Connors for Alex Goode’s try. In Newcastle, Vunipola accumulated 63 metres from 16 carries, beat four defenders, made two clean breaks, two offloads, an intercept and scored the decisive try.

No, what grated this time was that opportunity knocked with Owen Farrell suspended and Leinster showed what they could do in the second half, when coming hard on to the ball, recycling it with their customary intensity and also getting to the edges.

Given the chance to do it all again, one would venture Leo Cullen and Stuart Lancaster would make three or four different selections

Clearly spooked from the moment Devin Toner missed the kick-off and from almost every put-in as their scrum was shunted backwards and the scoreboard mounted, their passing and protection of the ball gave Saracens further control of the game.

In truth, Saracens didn’t do all that much. They conjured one try from their only attack of note, otherwise relying on their swarming defence, kick-chase and scrum. But because of Leinster’s fault lines, they didn’t have to do much more.

Good judges say the foot positioning of the Leinster frontrow gives them less balance now and the early pictures presented to Pascal Gaüzère coloured some of his decisions thereafter, ie the penalties against Cian Healy and Ed Byrne for whipping the scrum even though Richard Barrington was clearly scrummaging at an angle for the second. Nor did Leinster’s defensive lineout function at all.

Given the chance to do it all again, one would venture Leo Cullen and Stuart Lancaster would make three or four different selections. Scott Fardy would have suited that war at some point at least and their omission of Rónan Kelleher, in contrast to previously retaining faith in Jordan Larmour, was very un-Leinsterlike.

Leinster had earned themselves a gilt-edged chance for a fifth star, but they have the resources to come again. Eight of Saturday’s match-day squad, including three Champions Cup debutants, are 24 or under and the average age of the finishing XV was 25.

Furthermore, without the distraction and physical toll of a couple of big European games, the Ireland frontliners should be refreshed, motivated and better prepared for the six-Test, end-of-year itinerary.

It may feel like it right now, but it’s not all doom and gloom.

Disappointment and frustration par for the courses as golf goes into lockdown 18:59
Keldermann claims the lead in Giro d’Italia 18:57
GAA’s Covid Advisory Group considering GPA demand for universal testing 18:45
Canter gallops to stunning 60 to lead by four at Italian Open 18:32
Dan Martin toasting another stage win at the Vuelta 18:00
Crossword Get access to over 6,000 interactive crosswords