Harry Byrne, Craig Casey and James Lowe among those who’ll train with the squad 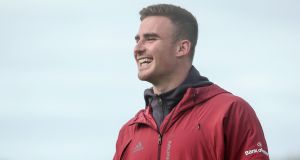 The winds of change in the Andy Farrell era have, as expected, swept a little stronger through the Irish squad following the announcement of a 35-man squad for the re-arranged 2020 Six Nations games at home to Italy and away to France.

Compared to the 36-man squad which was named before the England game, in addition to the return of Garry Ringrose who had suffered a fracture thumb in the opening game against Scotland, all told there are 13 changes.

Six uncapped players have been called into the squad, as Hugo Keenan, Shane Daly, Jamison Gibson-Park, Ed Byrne, Ryan Baird and Will Connors are all rewarded for strong form since the resumption. Baird and Connors had trained with the squad as ‘development players’ in the Six Nations, with Connors being promoted to the full squad for the round four game against Italy.

The Connacht half-back pairing of Kieran Marmion and Jack Carty also return, with John Cooney and Luke McGrath missing out in addition to the injured Will Addison, Keith Earls, Dave Kearney and Billy Burns.

Up front, Finlay Bealham, John Ryan, Quinn Roux, Tadhg Beirne and Jack Conan are all back in the squad as well, several of whom had missed out due to injury earlier in the year.

The most notable absentee is the 70-times capped Devin Toner and the 56-times capped Jack McGrath, as well as Ultan Dillane and Jack O’Donoghue, while injuries have also ruled out Tadhg Furlong, Dave Kilcoyne, Tom O’Toole and Max Deegan.

In addition the uncapped quintet of Harry Byrne, Craig Casey, James Lowe (who becomes eligible in November for the eight-team Autumn Nations Cup), James Tracy and Fineen Wycherley will train with the squad next week at IRFU High Performance Centre in Dublin.

Ireland take on Italy at the Aviva Stadium on Saturday October 24th before facing France in Paris the following Saturday (31st).

Ireland currently sit fourth on the Six Nations table one point behind Scotland and four points behind England and France, but they have all completed four rounds compared to Ireland’s three. Back in February Ireland recorded wins over Scotland (19-12) and Wales (24-12) before losing to England (12-24) at Twickenham.

Ireland head coach Andy Farrell commented: “there has been a huge effort right across Irish rugby to ensure that the professional game could return safely and that work is greatly appreciated by the national management. We have two competitions to play in over the coming months but will focus first on a strong finish to the Six Nations Championships.

“The return to rugby has not been without its challenges as some players have suffered injury setbacks and there has been limited playing opportunities ahead of a busy and exciting international window. We will be closely monitoring the form and fitness of players competing in the Pro14 over the coming weeks.”