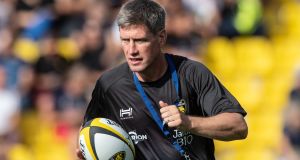 Munster have a 50 per cent chance of being drawn against Ronan O’Gara’s La Rochelle side. Photograph: Xavier Leoty/AFP via Getty Images

The permutations in the draw for the Heineken Champions Cup, which will be made toward the end of this month, have been clarified by the results of the last few weekends, in particular with regard to the potential pool opponents for the Irish teams.

For example, there is now a 50 per cent chance that Munster, who had to cancel training yesterday after confirming that an unnamed senior player tested positive for Covid-19, will face La Rochelle, where their legendary former outhalf Ronan O’Gara is the head coach.

The possible opponents for Connacht are less clear-cut

As no teams from the same league can meet each other in the pool stages, each Pro 14 team will play one team apiece from the Top 14 and Premiership, at home and away.

Leinster and Ulster, on foot of reaching the 2019-20 Pro 14 final, will be in Tier 1, and will face French and English opponents from Tier 4. So Leinster will face either Toulouse or Montpellier, along with Gloucester or Northampton, and Ulster’s opponents will be drawn from the same quartet.

The Top 14 was abandoned in early May after 17 completed rounds, thus leaving Toulouse and Montpellier in seventh and eighth places, and this was one of the driving factors in the move to expanding the tournament from 20 to 24 teams on a one-off basis.

As the losing semi-finalists in the 2019-20 Pro 14, Edinburgh and Munster will be in Tier 2, meaning their opponents will be from Tier 3 in the Top 14 and Premiership. As La Rochelle and Clermont are the two French sides now certain to be in Tier 3, Munster will thus face one of those sides.

As things stand, their English opposition would be either Harlequins or Sale, although the latter could move into the Premiership’s top four at Bath’s expense if their controversial rearranged game against Worcester goes ahead today and they win it. In that case, Munster would face Harlequins or Bath.

If they are drawn in the same pool with La Rochelle, it would not be the first time for Munster to cross swords with O’Gara, their all-time record points scorer with 2,625 and the competition’s most prolific points scorer with 1,385.

Munster did the double over Racing in O’Gara’s fourth and last season as an assistant coach with the Parisians (2016-17) before he spent two years helping the Crusaders to win back-to-back Super Rugby titles.

O’Gara is in his second season as La Rochelle head coach, working under their director of rugby Jono Gibbes, formerly assistant coach at Leinster and head coach at Ulster.

The possible opponents for Connacht are less clear-cut. Andy Friend’s team have qualified in Tier 4 from the Pro 14, and will thus play Tier 1 sides from the Top 14 and Premiership. As things stand that would be Bordeaux or Lyon, although Racing could replace Lyon were they to beat Exeter in the 2020 final on Saturday week.

Racing’s Top 14 game away to La Rochelle last weekend was cancelled after nine members of their squad tested positive for Covid-19 although as things stand their Top 14 game against Toulouse next Saturday is going ahead.

The Tier 1 sides from the Premiership will hinge on the outcome of their semi-finals this coming Saturday. Exeter and Wasps will be at home in those semi-finals and should they progress, then Connacht would face one or other. Even if Exeter lost, they could still be upped to Tier 1 were they to beat Racing in the Champions Cup final.

Of course, were the Bristol Bears to advance to the Premiership final against Exeter there would then be a 50 per cent chance of Connacht being drawn against their former head coach Pat Lam and former captain John Muldoon, who is now one of Lam’s assistants at Bristol as their defence coach.

Lam spent four seasons at Connacht, guiding them to their first senior trophy when beating Leinster in the 2015-16 Pro12 final at Murrayfield. After guiding big-spending Bristol to the Championship in his first season and ninth in the Premiership last season, Lam has also taken them to a Challenge Cup final against Toulon on Friday week.

After 16 seasons with his native province when making a record 327 appearances and captaining Connacht to that 2016 title, Muldoon joined Lam as Bristol’s defence coach in 2018 before recently switching to forwards coach. A reunion would be given added interest by the presence of Jake Heenan and Niyi Adeolokun in Bristol’s squad.

This season’s Champions Cup is scheduled to begin on the second weekend of December, Friday 11th to Sunday 13th, which is a week after the final series of Autumn Nations Cup games. The second round of games are a week later, with the third and fourth rounds on January 15th/16th/17th and 22nd/23rd/24th.

The four highest-ranked clubs in each pool will qualify for the quarter-finals, and the clubs ranked numbers five to eight in each pool will compete in the knockout stage of the Challenge Cup. In another change of format, this season’s quarter-finals will be played over two legs, with the higher ranked clubs having home advantage in the second leg, before the semi-finals and the final, which is scheduled to take place in Marseille on May 22nd, 2021.

*Racing would become the Top 14 second seeds and move into Tier 1 if they beat Exeter in the 2020 Champions Cup final.

**The top four in the Premiership depends on the outcome of their semi-finals next Saturday.

***Sale would move into the top four at the expense of Bath were their rearranged final game of the regular Premiership season against Worcester today to go ahead and were they to win it.