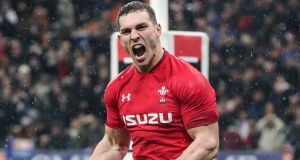 “It does not get any bigger than this” is a catchphrase of a television programme for aspirational cooks, but it will do at the Principality Stadium on Saturday when the ancient rivalry between Wales and England is seasoned by the prospect of the Six Nations title in World Cup year.

A third successive victory in Cardiff would leave England needing to self-destruct to miss out on a third championship in four years under Eddie Jones with home fixtures against Italy and Scotland to follow, while Wales will probably need to match Warren Gatland’s final year in charge with his first one and secure the grand slam.

“It does not need much bigging up this week, does it?” says the Wales and Lions wing George North. “We all know what is up for grabs. I have not been involved in a game against England when it is not built up. If you look at where we are in the standings, both two wins from two matches, you know it is going to be tense.

“It is a fixture that has history and tradition. Growing up in Wales it is the game everyone speaks about, the one they want to go to. It is the ‘I was there’ fixture – super patriotic.”

England are odds-on favourites to win even though they are playing away from home against a side that is looking to create a record of 12 consecutive victories, a run that started after they were beaten by Ireland in Dublin at this stage of the Six Nations last year.

“England have been in great form, both sides of the ball,” says North. “They have been exceptional tactically. They have great line-speed, are strong defensively and they have good variation in attack through their kicking game and strike plays. Their matches this year have probably had a bit more rugby than ours and they are certainly in a good place.

“We did not produce the best performances in our two matches. We made a slow start in France, then brought it back, and Italy was a tough place to go having made so many changes. As Warren says, winning is a habit: ugly or pretty, you have to win wherever you go.”

It is not just Wales who are chasing a record. North’s two tries in Paris took him to 19 in the Six Nations, three behind Shane Williams’s landmark. The wing, who returned to Wales last summer after spending five years at Northampton, has time on his side: he has won 80 caps and at the age of 26 is on course to become the youngest international centurion having more than two years to beat the record of the former Australia flanker George Smith.

“This week is about more than record hunting,” says North. “We have the opportunity to put ourselves in a great position. We trained really hard last week. The boys know what is at stake and come the weekend we will have had the best preparation.

“I don’t think I have peaked yet,” he says. “There is plenty more left and bits of my game I can work on to take it to the next level. As the game changes, you need to develop. If you look at the first two rounds of the Six Nations, you can see the physicality and the speed of matches and that is where it will be at the World Cup. You have to keep up with it and matches like this weekend’s are the ones you want to be involved in. It inspires me to keep going.”

North, who started his international career on the left wing but has crossed to the right, will be opposite Jonny May, who followed up his try in Dublin with three against France to take him to six in his past four Six Nations matches. The Leicester wing scored England’s two tries in their 12-6 victory over Wales at Twickenham last year.

“He has been playing very well,” says North. “The way England play suits him, gainline dominant and front-foot, shifting the ball into space, and kicking is a huge part of their game. When you have gas like that, you are able to exploit it and it is certainly working at the moment.

“I am sure there will be some chopping and changing tactically: different defences bring different challenges. The saying is that if something is not broken, don’t fix it, but I am sure they will have something up their sleeve.”

North was on the left wing when Wales last defeated England in the Six Nations, in 2013, when their 30-3 victory not only denied their rivals the grand slam but took the title from them. Alex Cuthbert scored their two tries on the right wing that day.

“There was a lot of smiling afterwards,” says North. “It is the same with any match Wales play. You can tell the result walking through Cardiff or doing your shopping. Rugby is a huge part of life in Wales from old ladies telling you what went wrong to kids telling you how you can get better. They are passionate about it and we know what this weekend means.”