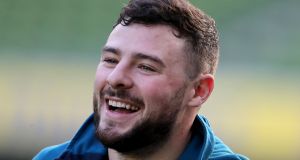 Robbie Henshaw has signed a new deal with Leinster and the IRFU until 2022. Photograph: Dan Sheridan/Inpho

The IRFU have announced Robbie Henshaw has signed a new contract keeping him at Leinster until June 2022.

Ireland centre Henshaw has earned 37 caps since making his international debut against the USA in 2013, most recently in the Six Nations opener against England, where he started at fullback.

Despite a number of injuries, the 25-year-old has played an integral role in some of Ireland’s most famous victories - including the 2016 win over the All Blacks in Chicago, in which he scored the pivotal try.

A 2017 Lions tourist, Henshaw was also part of the Connacht side who won the 2016 Pro12 title, before moving to Leinster the same year.

On his new deal, Henshaw said: “I am delighted to have signed a new three year contract with the IRFU.

“It is an exciting time to be part of Irish Rugby and having tasted success with both Ireland and Leinster in recent seasons I am eager to play a role in driving further success at both international and provincial level.”

IRFU performance director, David Nucifora, said: “Robbie has established himself as a leader within this Ireland squad and has delivered consistent world class performances which have helped to drive the sustained success enjoyed by the national team.”