Now an Irish citizen, South African enjoying his time with Connacht and his life in Galway 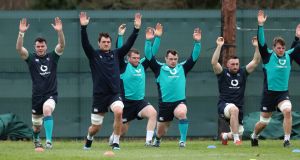 More than ever, Quinn Roux feels like he is truly a part of the Irish squad these days.

He made his full Six Nations debut in the win over Scotland last time out, his first trip with the new Irish passport he received at a ceremony in Killarney recently.

It’s hard to believe he arrived here from Cape Town as long ago as 2012, and that “proud” day in his life when receiving his new passport prompted him to reflect on his journey from Cape Town to Connacht, via Leinster.

“I’ve been given an opportunity and I will always be grateful for that. It’s seven years that I’ve been here and sometimes I look back and ... I’m an Irish citizen now. I got my passport a few weeks ago and it has been really good for me. I’m just trying to give as much back as I can on the rugby pitch and in this environment, in Connacht as well.”

Although in some senses he says nothing has changed, by the same token he describes becoming an Irish citizen as “life-changing”.

“Yeah, it’s life-changing. It makes a big difference for me and, hopefully, for my kids one day,” he said at Ireland’s Carton House base yesterday.

“This also just makes travel an awful lot easier because you can’t travel that much on a South African passport,” said Roux, who previously had to apply for six month visas in order to play for Leinster or Connacht in the UK or Italy.

“It doesn’t feel like I’ve been accepted now just because I’ve got the passport,” he reiterated. “I felt I had been accepted years ago, here and in the Connacht environment and even when I was at Leinster where I was well looked after as well.”

When he first arrived in Leinster in 2012 as an “inexperienced” 21-year-old living on his own, it was on a one-year deal. Despite being “ravaged” by injuries he speaks of the trust Leinster placed in him by offering him a new two-year deal, as well as finishing off that year with league and Challenge Cup medals.

In the second of a two-year deal with Leinster, he went on loan to Connacht and is now in his fifth season there.

“I probably didn’t get along that well with the coach [Matt O’Connor] there, which is fair. You can’t get along with everyone and I got opportunities of playing with Pat Lam in Galway, and I haven’t really looked back since.

“It’s been really good for me. My wife [Rentus] really loves Galway. We’ve really settled in there, so we’re really happy,” said Roux, who also spoke of the improved confidence levels at Connacht under Andy Friend.

He and Rentus bought a house in Knocknacarra, just outside Salthill, last year and he would happily see out his career with Connacht if possible.

“We love Galway and the people have been really good to us. It is pretty much home for us now. Hopefully, it works out that way and I can play in the new stadium some day,” he says with a broad smile.

Having initially signed him, Joe Schmidt has also retained his belief in Roux. Much more at ease in front of the media as well as the Irish squad, Roux’s confidence has also been helped by Connacht affording him the responsibility of calling the lineouts, a role he reprised in Murrayfield when Ireland had a 100 per cent return.

Amid the increased barrage of match statistics supplied in this Guinness Six Nations the number of ‘ruck contributions’ helps to demonstrate why Schmidt has retained such high faith in the lock. In terms of ‘own ruck arrivals’, being one of the first three Irish players to resource a ruck and in ‘cleanouts’, Roux’s numbers were the highest of any player on the pitch, 54, 46 and 25.

Does he feel this work is underappreciated?

“Yeah, maybe. It’s not the prettiest thing to look at – people hitting rucks – so that’s not going to get attention that a really good ball carrier or a really good poacher over the ball is going to get. I guess it’s all about the people in the environment who you work with that really appreciate that. And that’s all that really matters.”

“It’s the dirty work and someone needs to do it. I kind of take pride in doing that and it’s good to see that some people notice it on the weekend.”

In actual fact, Roux admitted that “there were one or two that I could have done a better job, so the stats only tell one part of the story”.

Roux has effectively reinvented himself from the dynamic, ball-carrying lock operating in the outside channels for Western Province and the Stormers.

“I guess it’s just fitting into what the team wants from you. We have some world-class ball carriers in this team. So it’s not that I don’t want to carry the ball, it’s just that I am fitting into a system and it’s all about making the job easier for the guy next to you.”

“If it takes cleaning out rucks for the whole day, if that’s what it takes, I will do that. It’s not necessarily that I am going out there chasing rucks and trying to stay away from the ball. It’s just trying to fit into the system that is best for the team. That’s all it is really.”