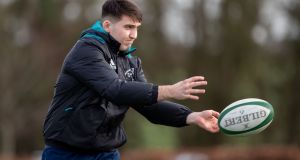 Billy Scannell is in the Ireland Under-20 squad travelling to Italy this weekend. Photograph: Morgan Treacy/Inpho

Ireland coach Noel McNamara has made two changes to the starting side that beat Scotland 24-5 in Netherdale last time out for Friday night’s Under-20 Six Nations Championship match against Italy in Rieti (6.0, Irish time).

The 19-year-old Billy Scannell will become the third member of his family to play for the Irish 20s, following in the footsteps of hooker Niall (11 senior Ireland caps) and centre Rory (three senior caps) as he is one of four new faces named among the replacements; prop Callum Reid, outhalf Ben Healy and backrow Ronan Watters make up the quartet.

Ireland are unbeaten in the Six Nations, racking up wins against England and Scotland, but matches against Italy in recent times have been generally tight. The Italians beat Scotland away but were soundly thumped by Wales.

McNamara said: “We had a really positive session with the Ireland Senior side last Friday in the Aviva Stadium, so the players are now looking forward to getting back into the green jersey on Friday night in Rieti.”

Meanwhile the Ireland Women’s team shows just a single alteration from the run-on side that beat Scotland for Saturday night’s clash with an unbeaten Italy in Parma (6.30, live on RTÉ 2). Kathryn Dane comes in at scrumhalf for Ailsa Hughes who drops to the bench. Lindsay Peat and Laura Sheehan are included among the replacements, available for the first time in the campaign.

Ireland head coach Adam Griggs said: “It was great to come away with five points after the Scotland test. It was a physical game in tough conditions, but the players were focused on putting in a good team performance together and showing the quality rugby they can produce.

“We were pleased with the opportunities that we created and while the challenge for this group is to become even more clinical under pressure, we definitely feel each week we are improving and taking the right steps to get there.

The Italian game should be a cracker, they have played well of late and are unbeaten so far in this championship which isn’t easy to do.”