Johnny Sexton in line to start against Italy on Sunday 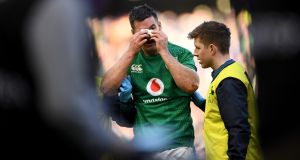 Johnny Sexton is expected to start ahead of Joey Carbery at outhalf against Italy in Rome this Sunday.

“With all these games it is about getting the right mix on the pitch,” said Ireland kicking coach Richie Murphy.

“Joey obviously played a lot of the Scottish game so it is trying to balance that up with game time for Johnny. We’ve watched them training over the last few days. Both guys are in good form.

“We will make a decision later,” Murphy added.

With no new injury updates – Robbie Henshaw is available for selection alongside returning locks Iain Henderson and Tadhg Beirne – concerns were raised about Sexton’s style of play, which led to the 33-year-old being targeted and injured by Scottish players at Murrayfield, which provided an opportunity for Carbery to shine.

“It’s the game [SEXTON]plays,” said Murphy. “He plays flat on the line. When you play flat on the line you are going to get hit. Obviously we don’t want him off the pitch. There is a fine line between what is fair and what isn’t fair and as long as the referees are able to judge that and decide what is right Johnny is not going to change the way he plays that much.”

Regardless of how the coaches want him to play?

“If he changes he is not the same player,” Murphy responded. “He won’t create the holes he creates for other people, then there is no point really in having him. It is a twofold thing really; the idea of him changing his game so he can stay on the pitch doesn’t really fit in.

“He needs to play the game he feels is best. He is a confrontational type of character. He wants to play on the gainline, he wants to create space for others.”

So, Murphy was asked, how did Sexton’s risk reward approach play out against Scotland?

“Well, obviously he was off the pitch, you know what I mean? He created a really good try. That wasn’t the only hit. There were other hits there as well. I don’t think he is going to change the way he plays the game. He is going to play the game the way he has done for the last number of years, which is part of what made him World Player of the Year. If it brings him to that level I can’t see him going back away from that.”

The Ireland management report both Sexton and Carbery have trained competitively against each other this week.

It was put to Murphy that Rome presents an ideal opportunity to give Carbery his first Six Nations start after previously wearing number 10 for Ireland against the USA, Fiji and Australia last summer.

“It would be a natural progression for him at this stage. Obviously he came on when Johnny went off very early against Scotland. Probably had a little bit of a shaky start but build into the game. Those opportunities when they come along he needs to grasp them with both hands.”

Presumably, Sexton is not be a fan of rotation?

“I think every player wants to play all the games that they can for their country but I think he is also balance enough to realise changes sometimes need to be made.

The six day turnaround between France and Wales in March may demand rotation.

“Two guys are competing for a place. As coaches that gives us the opportunity to get them to go against each other a little bit and try and get the best out of both of them.”

Davy Russell ponders what might have been for Tiger Roll 17:18
Cycling Ireland thrilled with take-up for Zwift League series 17:02
Racetrack organisation does not envisage any closures in the short-term 15:03
Coronavirus crisis could cost the GAA up to €60 million 14:19
Eddie Hearn: Tyson Fury is Anthony Joshua’s opponent of choice 12:55
Here is your handy guide to sport on television this week