So far this year he’s made nine appearances, and he played at outhalf on Friday night 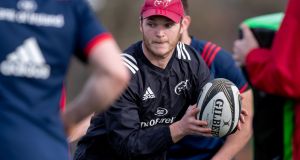 Munster have extended the contract of injury prone outhalf Tyler Bleyendaal, as well as four other players.

Bleyendaal, Ciaran Parker and Alby Mathewson have all signed contract extensions at the province. While the academy duo of Sean O’Connor and Keynan Knox have also put pen to paper.

Bleyendaal has made 47 appearances in red since his debut in September 2015 and has captained the province on 11 occasions. Munster’s Player of the Year in 2017, the New Zealand-born playmaker will remain with the province until June 2021. As of last year he is Irish qualified, but has yet to be selected by Joe Schmidt.

Injury forced him to make only seven appearances last season, so far this year he has made nine, and he played at outhalf in the 43-0 win over the Southern Kings on Friday night. Fellow outhalf Ian Keatley is on a short term contract with London Irish and has agreed to join Benetton Treviso at the end of the season.

Scrumhalf Mathewson will remain with the province until the end of the season after signing a further extension. The former All Black has played for Munster on 13 occasions, scoring two tries.

Tighthead prop Parker will move from a development contract to a senior contract for next season. The 23-year-old has made 11 appearances for the province.

While the 22-year-old O’Connor will advance to the senior squad next season on a one-year development contract after completing his three years in the academy. The versatile Tipperary native can play at lock and in the backrow and has made nine appearances for the province. In 2016 he featured for the Ireland Under-20s side that secured their best-ever finish as runners-up at the World Rugby Under-20 Championship in England.

Knox has signed a three-year deal with the province that sees him continue with the academy for a further year before advancing to the senior ranks. The 19-year-old Young Munster player featured for Munster A on five occasions in the Celtic Cup earlier this season.

McIlroy well off pace as Thomas leads low-scoring Zozo 10:24
Seán O’Brien: Anger over my parents’ break-up has never left me 09:30
Touching response to Rashford’s clarion call reveals very best of England 07:00
Michael Walker: Is De Gea an answer again amid the questions at United? 06:00
Greville and Westmeath relishing life in the top tier 06:00
Here is your handy guide to sport on television this week