Gordon D’Arcy: Pressure off, Ireland can afford to lose the shackles 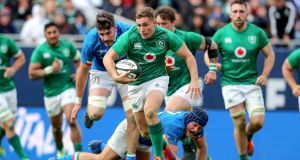 Time to play some jazz. The Grand Slam is for another team, the title all but relinquished, this Six Nations stripped from Ireland’s control. Such is life. Lessons will be learned from the England defeat, just not right now.

Not in Rome, that’s for another time.

With these last three games can come the gift of improvisation. See a blank canvass, now paint. Splash every colour imaginable, use broad and subtle brush strokes.

Irish players are unburdened of the usual pressures they crave. They no longer need to eke out a result by any means. Playing the percentages are less relevant. It’s about rediscovering confidence levels, it can be about playing with a little more élan.

Now, we know the basic structures of Schmidt’s Ireland will remain the same but opportunity comes a calling in Rome. Same applies when France – whose coach has rolled the dice yet again with his third radically different line-up to face Scotland (taking the jazz analogy a little too literal) – visit in Dublin and the finale in Cardiff.

Shaun Berne wore Leinster blue during the crossover years between Michael Cheika and Joe Schmidt. A decent outhalf-cum-centre, Shaun doubled back to the club after his career ended to work as a player development officer so, in short, he was liked and well regarded in equal measure. He’s back in Australia now coaching the Melbourne Rebels backline. But I remember the importance of his sense of humour in Cheika’s last season, as we struggled to carry the weight of being European champions.

Everything had become very serious. We were forcing it, seeking to grind our way into form. We knew Cheiks was leaving. The environment hadn’t got stale, far from it, we just weren’t the same team that ripped Munster apart at Croke Park a few months earlier.

It happens. It’s happening to Ireland this year. No big deal, but the previous two performances showed a dip from the momentous displays of 2018.

Shaun, sensing the vibe at training – ultra serious, far too tense – did his best Will Ferrell impression in the movie Old School: “EVERYONE! TRY TO HAVE SOME FUN!”

We were trying so bloody hard to be perfect we’d lost our flow. We’d stopped being ourselves, stopped focusing on one or two small tweaks that were needed.

Go back to the England game and look at CJ Stander, or anyone really. The effort was unbelievable. I pick Stander out as he made the usual double figure carries and tackles, just for little gain or impact. Same goes for Conor Murray at Murrayfield. The scrumhalf will always be the immediate victim in a team that is missing their usual high notes. Especially when he is charged with implementing a kicking game from the base of slow rucks.

Conor just needs to find his rhythm. Several players are in this situation.

One way of breaking the current cycle is to “try and have some fun”. Of course, Carton House is a very demanding and serious environment but Joe and the other coaches might find clarity from the absence of a tangible target.

The trophies will almost certainly be handed back in March and probably to whoever prevails at the Principality Stadium on Saturday. Wales versus England is the game of the tournament now. The points difference (Ireland are currently minus 3 to England’s plus 48) and lack of a bonus point leave them sitting fourth in the table.

So, Ireland can forget about the title race as it has got nothing to do with them. Even if they spoil it for Wales on March 16th, England are out of reach.

Move on, embrace the lack of pressure. Play some rugby. Find some form.

Shaun’s joke did the trick. Let’s not overthink this, lads. No need to solve all the problems. Relax and our game will flow. We are still the European champions, and can be that again. It didn’t work out that season (2009/10) but we recovered.

Players need to be mindful not to overthink it! Against Italy I’ll be looking for inter-plays, usually around the ruck, like a tip on pass from James Ryan before contact or Tadhg Furlong offloading in contact. If selected, Chris Farrell should cut loose in midfield, and the back three can flood after him.

We all got caught up in the idea of Ireland plain sailing to Japan. How could we not after Johnny Sexton’s drop goal in Paris and the many winding runs of Jacob Stockdale? Such excellence had everyone dreaming big.

Fair weather doesn’t make a good sailor. England brought the storm. They may or may not have provided a blueprint for other teams to beat Ireland. Schmidt’s team does have a specific way of going about their business but they always adapt depending on the opposition. See Stockdale’s latest try. That move was designed to cut the Scots to pieces. It was game specific.

Nobody has “figured out” this Ireland team.

Yes, the big picture is all about the World Cup quarter-final. It’s still miles away but England brought it into focus. It’s no longer a dot on the horizon. The narrative has changed since November when we, almost to a person, believed that South Africa or New Zealand were beatable by this Ireland team in the knockout stages of Japan 2019.

The World Cup will require some jazz music from Ireland. Be it during the Pool stages or to reach the final, they’ll need to play in that subconscious flow state as much as we’ll need to grind teams into submission.

I’ve been lucky to experience that feeling in big games. The Grand Slam day in Cardiff (in 2009). I never got caught up in the madness and tension, just kept hopping from play to play. These are the joyous moments. When you are barely aware of your surroundings. Beating Australia in Eden Park. England at Croker. You’re just out there playing.

These last three weekends of the Six Nations should be just about that. Unleash the offensive qualities. It won’t win us anything but it will fill the team with confidence.

They are hardly running on empty, just need to start playing with a little more belief. The small details will always be important, but I’d like to see Ireland improvise on Sunday. Go for it whenever the space appears.

That’s needed. Or Stockdale doing his thing. Chip that low percentage ball into the Roma sky. Murray will spark by getting low and firing off passes.

Sometimes you can go stale for no obvious reason. I used to do hours upon hours of video analysis before a big match. Every angle needed covering, you feel, but sometimes it’s counterproductive. If you are good enough you learn from experience as well as analysis. So, whenever my performance dipped, I’d have faith. Do the basic research of opponents always but, be ready, but don’t flog the mind.

The Ireland players are knee-deep in this tournament. Most of the work has been done. Some lads have earned the right to train hard Tuesday, do a little homework and then relax. Keep the focus on next to nothing, just go play some Test match rugby in an Olympic Stadium. Break it all down and it’s a boyhood dream on Sunday. This is the same pitch where Toto Schillaci scored the goal to put the Republic of Ireland out of the 1990 World Cup. Real Irish sporting history and these guys are in it.

That would make me want to fine-tune a performance. The best moments in my career all happened in a flow state. It doesn’t start with a miraculous 70-metre run. It starts in your head, be ready for a catch and pass to send the outside centre rumbling upfield. Clear the ruck. Now, do it again. Eventually a chink of light will appear and you can stretch your legs.

The England defeat cannot be solved in the coming weeks but Ireland can tick plenty of other boxes.

Pick up your instrument of choice. Get into the groove. Play some jazz.