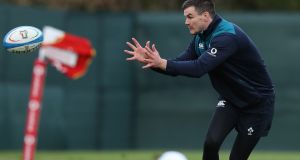 Like so much else in rugby, Ireland’s kicking game is intertwined with so many other aspects of their game. Normally a weapon, it has thus far been negated by a combination of England cleverly filling the chasing channel, slow ruck ball in both games, and the conditions in Murrayfield.

Even so, Joe Schmidt admitted post-match in Murrayfield that Ireland’s kicking game was “poor” and in the build-up to Sunday’s Guinness Six Nations game against Italy in the Stadio Olimpico, kicking coach Richie Murphy yesterday readily agreed.

“It was poor. Not at the level we would normally be at,” Murphy conceded, before stressing: “It was very, very tricky in Murrayfield. The wind was howling around it and it was very hard to know exactly where it was coming from, and what it was going to do to the ball.”

“Your kicking game is also linked so much to team attack and team defence. Just to isolate it out on its own is actually quite difficult because there’s so many other elements that go into it, but it is definitely an area of the game that over the first couple of weeks, where we haven’t been at the level we have been at before, and it’s definitely something we’re working hard on.”

As for their game management, on other occasions Ireland have also declined to kick, such as when running scrum ball in their own 22 to Chris Farrell shortly after going two scores ahead against Scotland, and the resulting turnover by Jamie Ritchie enabled Greig Laidlaw to make it a one-score game again.

“We try to set up as an attacking team. Okay, we’re nine points ahead at that stage, but our first instinct is still to play. There was an opportunity there, we didn’t execute the way we wanted, and because of that, it has an impact on the result in the end.”

“But it’s trying to kick at the right times, to either allow us to get into the contest or allow us to put the other teams under pressure, and in the first couple of weeks we probably haven’t nailed that yet.”

In stark contrast, England have scored six of ten tries directly from kicks, and kicked out of hand 47 times against the hapless French.

“They are playing a real pressure game, getting the ball in behind,” said Murphy. “That’s obviously worked really well for them. We have used similar tactics before, not maybe to the extent of kicking the ball 47 times in a game. But when those opportunities are there to turn teams and get the ball in behind them and apply a bit of pressure, it’s obviously something that we want to try and use as well.”

“At the moment we haven’t really been able to do that. We’ve kicked under pressure. We’ve kicked probably on the back foot a little bit so we are just trying to get ourselves into a situation where our kicking game is a lit bit more proactive than what it has been.”

Murphy confirmed that Robbie Henshaw, who is still being considered as an option at fullback, Farrell, Iain Henderson and Tadhg Beirne all trained yesterday at the squad’s Carton House base and are fit again for selection.

Although Murphy agreed that starting Carbery “would be a natural progression for him at this stage”, against that Johnny Sexton has been limited to just 103 minutes of rugby since the turn of the year.

Ironically, Carbery has much more game time this season, and of late, at outhalf. Accordingly, Murphy dropped the broadest of hints that Sexton will start in Rome.

“Yeah, I think that’s the big thing, he [Sexton] hasn’t played a hell of a lot and because of that it makes it tough just to get the feel. The big thing would be that the Johnny and Joey balance would be incredibly important and what way that pans out this week, we’ll just have to wait and see.”

Sexton’s enforced early departure against Scotland came after shipping the last of several late hits when taking the ball to the line and Murphy didn’t envisage Sexton changing his game at all.

“He probably actually started really well in creating space for the try and a few overlaps on occasions where he was pretty close to actually unpicking them,” said Murphy, before reiterating: “But he definitely hasn’t played enough rugby to be at full tilt yet.”

Hailing Carbery’s move to Munster, Murphy said: “I think he’s gone massively in the right direction. All those games that he played at 10 and pressured games, some of them haven’t gone exactly his way and he’s bounced back really well.

“Obviously Castres away, he missed a couple of kicks, come back from them and I think he’s kicked 22 in a row,” added the former Leinster outhalf, whose best run of successful kicks in his own playing days was 27.

It is also clear that, in contrast to Wales, Ireland will not be making ten changes to their starting XV for their game in the Stadio Olimpico.

“There will be some changes in the team because it’s only natural,” said Murphy. “That will happen, but I can’t see it being wholesale.”