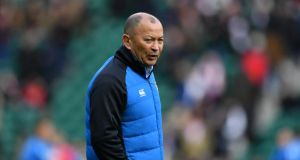 Eddie Jones has not ruled Maro Itoje out of the Wales game but he is not included in the 25-man training squad. Photograph: Dan Mullan/Getty Images

England have released Joe Cokanasiga and Dan Robson back to their clubs to play in the weekend’s round of English Premiership fixtures.

Cokanasiga and Robson are still on the comeback trail from significant knee and ankle injuries so have been given game time instead of being included in a 25-man training squad that will begin preparations for the Six Nations clash with Wales on Saturday week.

Maro Itoje and Dylan Hartley will be a part of the three-day England camp being held in London to continue their rehabilitation from their knee problems.

Eddie Jones suggested after Sunday’s rout of France that Itoje could recover in time for a bench role in the title showdown in Cardiff, but Hartley will definitely be absent and his involvement in the Championship is now looking increasingly unlikely.

Ben Te’o is present as he continues his challenge for Manu Tuilagi’s inside centre spot, but Mike Brown’s international prospects are looking bleak following his omission from the 25.

Eddie Jones has opted against calling up Alec Hepburn as loosehead prop cover for Mako Vunipola, who has been ruled out for 10 weeks by an ankle injury.

Instead, Ben Moon and Ellis Genge will compete for the number one jersey against Wales.