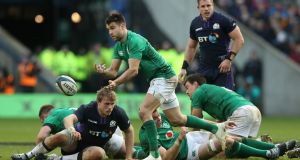 Munster coach Johann van Graan says that Conor Murray’s current form after a long lay-off is not a cause for concern and that he expects him to be back to his best soon.

Van Graan, who spent last week in Irish camp including the game in Scotland, said that massive standards are expected of players like Murray and that there is no reason to be perturbed by any dip in form.

Niall Scannell, John Ryan, Billy Holland and Chris Farrell have returned to the Munster set-up this week from the international camp and could feature on Friday night against the Southern Kings.

However, it is noticeable that loosehead Dave Kilcoyne has not been released, suggesting he could feature against Italy, while Joey Carbery has also been retained.

I think Conor is playing about 80 per cent every single week and hopefully he’ll be back to 98, 99 soon

And there is uncertainty that Tadhg Beirne might be fit enough for the Italian match, with van Graan confirming the lock still has some ground to make up from a knee injury.

Beirne and CJ Stander did some running and non-contact training at Munster’s base in University of Limerick on Monday morning where winger Andrew Conway returned to full training following a calf injury.

“Tadhg and CJ are still a few weeks away. They are on the normal procedure back, it’s good that both of them have started running. Both of them are on their feet. So, I think are in their time frame as released by the national squad, but no rugby training as of yet.

“Andrew did a bit of training with us today so we’ll see how he progresses later in the week. We saw last week with our medical side he recovered really well. We’ll see how it reacts tomorrow after training today but he looked pretty good in training.”

And there is also good news for Munster with versatile backrower Jack O’Donoghue poised to return to action for the first time since suffering a serious knee injury in the Pro14 semi-final loss against Leinster last May.

“There is a slight chance he might be on the bench, but I’m definitely not going to force him back. He’s such an important player for us. The two of us spoke this morning. Last season he played six, seven and eight, became captain for the first time, I think he is a player of international quality.

“There is still time for him to possibly put his name in contention for that quarter-final, but I’m definitely not going to rush him back, so if he is ready to go

tomorrow afternoon we will look at him, otherwise it might be another week.”

Van Graan, who was involved in 74 Tests with his native South Africa, said he enjoyed his week with the Irish camp and while he returns to duty this week with Munster with their Champions Cup quarter-final against Edinburgh now just over six weeks away, he said he has no concerns about Murray’s form.

“No, I don’t think anybody should worry about that. Conor is a world class player and everybody just expecting that he kicks every kick perfectly.

“I thought he put in a really big shift over the weekend in terms of his D and his reading and his passing. He scored a fantastic try. He won’t deliver the perfect performance every week but that’s a world class player. I don’t think he ever plays below 80 per cent.

“No, he’ll find his way back into top form. I think it’s more the things that people don’t look at, he is so good in his support play and his communication. He makes team-mates around him feel so good. So, I think Conor is playing about 80 per cent every single week and hopefully he’ll be back to 98, 99 soon.”

Van Graan said that he was impressed by the way his outhalf Carbery recovered from a set-back after coming on for Jonathan Sexton.

“I thought Joey did really well in that second half to steer the game. His goal kicking and the line break for the try, I thought he defended well and they’ve got a really good Irish squad.

“I have gotten to know him over the last few months and he is a fantastic character and has a lot of mental steel. When you play scrumhalf or fly half you handle the ball the most and if you make a mistake it gets a big spot light put on it. For me not only the way that he handled it but the team handled it was fantastic. To just regroup and went again, I thought it was a really good performance, not only from Joey but from the Irish side.”

Remote GAA annual congress likely to be a limited affair 06:00
Women’s game still hampered by players paying to play 06:00
Joanne O’Riordan: Sometimes we need a little nudge on the path to fitness 06:00
Where is George Gibney? podcast releases new photograph 06:00
Sonia O’Sullivan: Attending the Zatopek a real treat in Covid world 05:00
Here is your handy guide to sport on television this week