Six Nations 2019: do Ireland have the required bouncebackability? 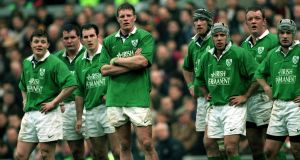 Ireland players look on during their opening round loss to England in 2000. Photograph: Billy Stickland/Inpho

Ireland head into Saturday’s clash with Scotland at Murrayfield knowing they need a victory to keep their Six Nations hopes alive.

Joe Schmidt’s side were blown away by England last weekend, losing 33-20 in Dublin, and with Wales also winning away to France they are now playing catch up in the bid to defend their title.

Last year’s crusade for the Grand Slam nearly fell at the first hurdle, with Johnny Sexton’s late dropgoal against Les Bleus in a sodden Paris preventing a narrative-changing first round defeat.

Nobody has ever won back-to-back Grand Slams since Italy joined the tournament in 2000, meaning Ireland always faced an uphill task to repeat the trick this year.

But, there is still a championship to be won.

In 20 opening Six Nations fixtures - including 2019 - Ireland have only failed to win on six occasions, with 14 first weekend successes (as a caveat, seven of these were against Italy).

But how have they fared in those years when they fluffed their opening lines in the championship? Here is a look at Ireland’s bouncebackability:

Scotland blew Ireland away in the opening stages at Murrayfield, racing into a 21-5 lead - Stuart Hogg crossing twice - before coming back from 22-21 down after the visitors had mounted a comeback. Italy were up next for Joe Schmidt’s side, and they steadied the ship with a nine-try, 63-10 rout in Rome. A 19-9 win over France at the Aviva Stadium followed, but Championship hopes were ended with a 22-9 defeat to Wales in Cardiff. Ireland rallied in their final fixture, stopping England from completing the Grand Slam with a 13-9 victory at home.

Not an opening defeat, but Joe Schmidt’s side were left with work to do after a first round draw at home to Wales. Ireland’s hopes of defending their title were all but dashed a week later, as they suffered a narrow 10-9 defeat to France in Paris.

The wheels then well and truly fell off in round three after a 22-10 defeat to champions-elect England at Twickenham. Closing victories over Italy and Scotland saw Ireland finish the Championship in third place.

Leigh Halfpenny’s 79th minute penalty saw Ireland beaten by the eventual Grand Slam winners in Dublin. Their scheduled second round fixture against France was postponed due to an unplayable pitch and rescheduled for March 4th - meaning they were able to bounce back with a 42-10 win over Italy. Ireland then drew the reorganised France fixture 17-17, before a 32-14 win over Scotland in Dublin. Their Championship ended with a resounding 30-9 defeat to England at Twickenham.

If 2012 feels like recent history, Ireland’s opening defeat to France in 2004 is from another era altogether. And despite losing to the eventual Grand Slam champions in the first round, Eddie O’Sullivan’s side rallied to win their remaining four fixtures.

They recovered from Paris with a 36-15 win over Wales in Dublin, before sacking Twickenham with a famous 19-13 victory - revenge for the previous year’s 42-6 loss at Lansdowne Road. Closing wins over Italy, and then Scotland, followed.

A bright new dawn for European rugby as Italy joined the party but a dismal start for Ireland, who were thumped by eventual winners England in their Twickenham opener. Warren Gatland’s charges bounced back with a handsome 44-22 win over Scotland at Lansdowne Road, before thrashing the new boys 60-13 in Dublin. A certain Brian O’Driscoll then announced himself to the world with a stunning hat-trick in a 27-25 win in Paris, before the championship ended with a 23-19 home loss to Wales.