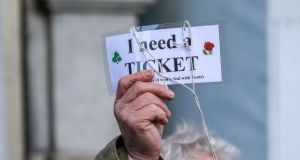 A fan looking for a ticket before Ireland’s Six Nations match against England at the Aviva Stadium. Photograph: Gary Carr/Inpho

The ticket resale website – Viagogo – has released a statement saying that Six Nations tickets on sale on their website for inflated prices represent “a pretty good deal to us.”

A recent investigation by the Guardian newspaper showed that tickets for the championship are on sale on the website for a combined value of €419,000, despite resale restrictions that might lead to buyers being refused entry at the turnstile.

Tickets for Ireland’s next home match – against France on Sunday March 10th – are currently available on Viagogo for €347 and above, a major increase on the already record prices set by the IRFU of €115 for category 1 seats which make the match one of the most expensive sporting events ever held in Ireland.

In England the RFU distribute their tickets in the same way as the IRFU does in Ireland, namely via rugby clubs with few going on sale to the public. For Ireland’s two home Six Nations matches this year – against England and France – none went on sale to the general public but plenty appeared on resale websites.

In response, Viagogo say that the tickets available on their website represent better value than the traditional method of purchasing tickets through clubs.

“The RFU do what is in their best interest full stop. It’s obvious why less than 5 per cent of tickets make it to the general public,” the statement read.

“In order to get access to coveted matches you either have to pay £10k for a debenture license, a huge corporate sponsorship starting at £100K, a whopping £1000 for a ticket that includes some pathetic meal or, if you are lucky, a £500 annual membership to a Rugby Club which doesn’t even guarantee you access to a ticket. We believe that people who acquire tickets through one of these marked up channels have the legal right to resell their tickets and recoup some of their investment. The tickets being sold by people on viagogo for £212 with no strings attached sound like a pretty good deal to us.”

With no tickets going on sale to the general public it is impossible to say where those on Viagogo are coming from but the recent Guardian investigation revealed that some came from rugby clubs around the country.

Five tickets for Ireland’s defeat to England on the opening weekend of the Six Nations were sold on Viagogo for €5,257.35 before the buyer was denied entry at the gate as the tickets were invalid.

They were originally allocated to Banbridge, in Co Down, the same club where Ireland captain Rory Best is registered.

A spokesman for the club said the member responsible for reselling their tickets on Viagogo had since had their access to tickets withdrawn. “Banbridge RFC are firmly against reselling of tickets and will withdraw access to tickets from any member found to have done so,” a spokesperson said.

Fine Gael TD Noel Rock is in the process of trying to get a Bill through the Dáil which would make the reselling of tickets for more than their face value illegal. However, VGL – the company behind Viagogo – recently contested that any attempt to ban the resale of tickets for major events at above face value prices will be a breach of constitutional rights to own property.

Mr Rock hopes that his proposed Prohibition of Above-Cost Ticket Touting Bill will complete its passage through the Dáil by St Patrick’s Day.