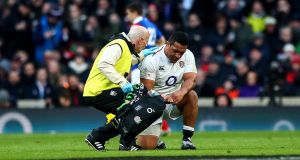 England’s Mako Vunipola will miss the rest of the Six Nations.

England prop Mako Vunipola has been ruled out of the remainder of the Six Nations by an ankle injury.

Vunipola limped off in the 44th minute of Sunday’s rout of France and watched the rest of the game with ice strapped to his left ankle.

“It is obviously very disappointing to lose Mako at this stage as he is an important player for us but it does provide an opportunity for the team to grow,” head coach Eddie Jones said.

Vunipola was voted the official man of the match in the opening round against Ireland after making 27 tackles and 11 carries in a performance described by Eddie Jones as “outstanding”.

He was similarly prominent against France and, while Jones has Ellis Genge and Alec Hepburn in the wings, Vunipola’s absence in Cardiff would be a colossal blow.

He missed out on the autumn internationals with a calf injury but his return to the starting XV along with his brother Billy and Manu Tuilagi has been a key part of England’s transformation during the Six Nations.