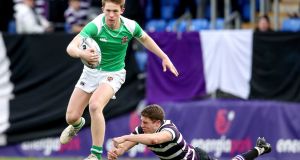 Declan Fassbender’s Gonzaga got ahead and stayed there to make the Leinster Schools Senior Cup semi-final at Donnybrook on Tuesday.

The Leinster League winners took the confidence from pocketing a trophy and put it to immediate use.

They were quickly into their patterns and tested Terenure in close and out wide with good decision-making at halfback between Jack Connolly and Harry Colbert.

Their superiority on the floor was the basis for many of their dangerous attacking positions, with the penalties earned being launched towards the corner.

They also had an ace out the back in the outside break of centre Frank O’Grady which was the key to opening up ‘Nure for lock Liam Tyrrell to score in the sixth minute.

Terenure knew they were in a fight and they found a way into the game at a ruck where secondrow Jack Coolican conceded a penalty for centre Henry Roberts to make it 5-3 in the ninth minute.

However, ‘Nure were unable to break free of Gonzaga’s pressure game as captain Jack Barry, Coolican and hooker Hugo Fitzgerald led the charge.

The smart kicking of Connolly was tightening the noose, wing Fergus Ó hOisín unable to gather O’Grady’s pass close to the line.

This was a warning sign of which Terenure did not take heed and O’Grady and fullback Conor Hennessy linked ahead of putting Ó hOisín over in the 24th minute. Connolly converted.

The game was drifting away from Terenure until Coolican was binned towards the end of the half.

They made two changes at the break, rearranging their backline, and looked to strike quickly with captain George Morgan upping the tempo.

Centre Roberts made it a one-score game from a penalty in the 40th minute.

Really, it was against the grain of play and a lesser side than Gonzaga could have let it get to them.

They stayed calm even when they malfunctioned at a 5m lineout and centre Matthew McGettrick’s burst up the left.

The inability of Terenure to sustain pressure was their downfall as Gonzaga had a number of men, such as Fitzgerald, Barry and flanker Tom Cullen capable at the breakdown.

Their replacement Arthur Henry got over the gainline and the forwards took it from there, prop Henry Godson eventually powering to the posts for Connolly  to convert in the 59th minute.

That should have been the end of it. They had control and a 13-point advantage.

There was encouragement for Terenure in Connolly’s card in the 62nd minute for a blatant bat down of the ball as fullback Patsakorn Kidd threatened down the right.

It was all ‘Nure needed, centre McGettrick putting the foot down and feeding Kidd for a fine try in the 67th minute.

Roberts’s failure to stick the touchline conversion meant there was still eight in it, a cushion comfortable enough that Gonzaga could see it out.

They now have the luxury of looking on to see who will join them in the final four.

3 Ringrose and Lowe return to Leinster fray after injuries