Garry Ringrose: We were far more clinical against Scotland

After sitting out Ireland’s Murrayfield revival, Ringrose is expected to play in Rome 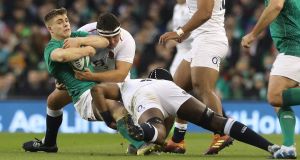 Garry Ringrose offered a positive prognosis on the hamstring injury that kept him out of Ireland’s Six Nations Championship victory over Scotland at Murrayfield. He has spent a little over a week at Leinster under medical supervision and, based on the improvement, should be available to Ireland coach Joe Schmidt for the test against Italy at the Stadio Olimpico on Sunday week.

He explained: “It has responded to well to rehab. It was just a strain of the hamstring, not something I would have done before, a soft tissue injury. I was cautious in getting it rehabbed. Over the last 10 days, it has responded really well.

“I ran yesterday [Monday]. It went well. It isn’t any worse today [Tuesday] which is a positive. We’ll see how it goes over the next week. I came back to Leinster for last week and this week because with the travel to Scotland, it was best to get two weeks of flat-out rehab. I think there will be a judgment call at the end of this week.”

There was no “pop” or tear, just a feeling of tightness following a sprint during the defeat to England. While his teammates were handed the opportunity to atone for the disappointment of defeat against Eddie Jones’s team, Ringrose watched Ireland’s renaissance in fortune at Murrayfield on television.

His general observations alighted first on the more prosaic qualities that underpinned the win, pointing out how captain Rory Best hustled to get across the pitch to make an important tackle, and another by Keith Earls on Josh Strauss, crucial moments in Ireland’s goal-line defence.

He pointed out that the pressure that Scotland put on in the collisions and at ruck time had a knock-on effect in occasionally neutralising Ireland’s attacking intent and a desire to get the ball wide. The visitors had to commit numbers to the breakdown and therefore the scope to get to the wider channels was restricted.

Ringrose, who was speaking at the launch of Gillette’s new SkinGuard Sensitive razor, said: “I wouldn’t say that the lads’ loading or depth was wrong, it was just the type of game it was, the opportunities didn’t present themselves as often. It’s not just running, man-on-man, it is footwork into space which can create momentum and quick ball.

“It might require phases previously to kick sensibly to then make their wingers or back-field sit off a bit, which would then create space on the outside. Rob [Kearney] found a bit of space and that was just by squaring up, playing flat and running [through] the hole.

“Scotland’s defence was very good and those holes were hard to come by. I think it is just the nature of the game, a bit of an arm wrestle and it’s not the prettiest, but I know from experience that the work the lads are putting in, that they may not be running really wide or spreading it wide, but they are working tooth and nail for every inch.

“The lads were really clinical when they did get their one or two moments. Even Joey [Carbery] going through two guys and then to see where Keith Earls came from, the support line, and for Joey to spot him, that’s just an effort play from both of them. In games like that they are won and lost in moments like that, that mightn’t be built through shape or constructing it; it’s just moments of brilliance.”

A relatively recent buzz phrase in rugby is “dominant tackles”, a measurement in statistical terms, but Ringrose counselled against getting too enamoured with just one aspect of defending, pointing out: “There are dominant tackles, then there are completed tackles [and] missed tackles. I have been involved in games where you have loads of dominant tackles but then all it takes is a couple of missed tackles.

“So it might be like, great that you are smashing them but then if you are missing them at the same time, it’s a balancing act really. Ideally it’s 100 per cent dominant, 100 per cent completed but it’s never the case. As a player you probably don’t get too caught up in that bigger picture stuff. You are focused on how you can help the team.”

Ringrose paused briefly from all matters Ireland to reflect on Sean O’Brien’s decision to move to London Irish at the end of the Rugby World Cup in Japan and the impact that the Tullow man had on him. “He is someone who you have to carry off the pitch when he is done.

“He would be an inspiration not just for guys in the same position but everyone in the team with the heart he plays with and the work he puts in. So he is someone who I would have looked up to in that regard.”

A more pressing concern is Italy, and, for Ringrose, a chance to be at the epicentre once again of Ireland’s midfield options.

Cavan send Monaghan crashing out in late Clones drama 17:38
Ziyech shines again for Chelsea as they brush aside Burnley 17:10
Resurrection beckons for Jamie Donaldson in Cyprus 16:39
Scotland end 18-year Welsh curse to finish on a high 16:31
Home comforts for Walker as he seals win for Man City 14:52
Crossword Get access to over 6,000 interactive crosswords