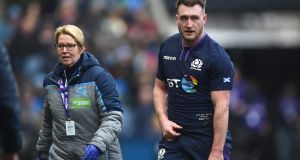 Scotland player Stuart Hogg leaves the field with an injury during the Six Nations match between Scotland and Ireland at Murrayfield. Photo: Stu Forster/Getty Images

Scotland coach Gregor Townsend is keeping his fingers crossed for good news as Stuart Hogg prepares to see a specialist about his injured shoulder.

It would be a major blow for the Scots if the Glasgow ace was ruled out for the final three fixtures with France, Wales and England.

But Townsend said: “He’s about to see a specialist later today so we’ll know more about his chances of playing over the next few weeks after that.

“I’m very hopeful that he’ll get good news and that he’ll be available to play some part in the Six Nations.”

If Hogg does fail to recover in time to feature, Townsend insists he is happy enough with his cover at 15.

The British and Irish Lion was replaced by his understudy Blair Kinghorn after trudging off during the 22-13 defeat at Murrayfield.

The young Edinburgh back scored the Scots’ first ever Six Nations hat-trick from the left wing against Italy in their tournament opener and Townsend said: “Blair obviously had a great game against Italy. He backed that up with his first touch as he got through the Ireland defence on Saturday and was heavily involved in the second half.

“We’ve got good strength and depth in the back three. Tommy Seymour and Sean Maitland have both played at full-back and are both very experienced players.

“I believe Byron McGuigan is back for his club this week, so if Stuart is missing — and I really hope that’s not the case — then we do have other players who have played international rugby and are in really good form.”