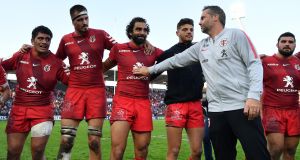 They’d only missed out on qualification for the first time last season, but somehow their absence has felt longer and, it seemed that way for the once great French standard-bearers in Europe themselves too.

But Stade Toulousain are back.

Staff workers in the club could not recall the last time the Stade Ernest Wallon was this vibrant. It’s been seven seasons since they won their last French title, and nine seasons since the last of their four European crowns and, in truth, they haven’t been contenders since either.

Their last knock-out win in Europe was at home to Biarritz in 2012 whereupon Leinster beat them in the Aviva in the semi-finals, and a year later Edinburgh ended their interest at the quarter-finals.

Finishing 12th domestically two seasons ago, the crowds also dwindled in the face of some stultifying rugby, and unable to compete financially with the new French behemoths, they’ve had to both unearth their own talent again and play Toulouse rugby.

They don’t look especially well coached, they’ve certainly ridden their luck to get two wins from two, but as their wondrous match-winning try demonstrated, they transition from defence to attack brilliantly and it has to be said that Toulouse certainly had the superior offloading game.

“Very proud for the team, the players because we have a very young team with big potential and today, with injuries and suspensions, we had a lot of players out. The young players showed the way, they took the opportunity and enjoyed the game I think. We won on confidence for the future, we know now we have big potential for the team.

“The mentality was positive, because beating Leinster could be a historic exploit for us. We tried to beat the best team in Europe playing our game to the maximum level and to enjoy the moment with the supporters.”

The average age of their starting team was 25, and Toulouse had seven players aged 23 or under in their 23-man squad.

“It’s great for confidence, we worked very hard all the weeks and I think and hope they can understand the potential, to have more maturity and confidence for the future to be a strong team. We are far away from Leinster’s level, we need more consistency. But big potential. We are happy for it.”

If nothing else, this day showed how much this competition means to the most pro-European of French clubs.

“Two years ago, last year perhaps with the new president and the new coach you can feel a new positive atmosphere. A restart for the club. We hoped and today, last week in Bath too, that puts Toulouse back in the cycle. We know we have a lot of jobs to do again, but we are on the way – we hope.”

The try was also very much a Toulouse try.

“Like Toulouse can do,” agreed Sonnes. “We want to play like that, we coach the players to play like that because it is our identity. We love it, we really love it and it’s effective mostly. It was beautiful. Sometimes we’re beautiful!” he smiled broadly.

Sonnes won three championships as a player with Toulouse in 1994, 1995 and 1997. After the second of those successes, and on the brink of the French team, he took a year’s sabbatical to surf on the Pacific coast, from Los Angeles to southern Mexico.

After coaching Spain from 2010 to 2012, he coached Bordeaux (2012-16) and then pitched up in Cork, to coach the Bandon club and Bandon Grammar School, for the last two years before relocating to Toulouse.

“Yeah, we have all the committee of Bandon here today. Conor is here,” said Sonnes in reference to Bandon’s director of rugby, Conor Slattery. “I received some messages from Bandon today. Munster are happy, Leinster lost!”

Toulouse were missing a host of injured players, with three more suspended, which made this feel even more like one that got away from Leinster.

The generous helpings of compliments from a week ago seem a long way away now, although Rhys Ruddock maintained these were “nothing I was aware of at the time”.

He added: “I think we just have to suffer together now on the way home, a rough, long journey home, just the disappointment lingering. But we will get back to review it and look at the performance itself and the way we prepared, as we always do, and challenge ourselves to get better and grow from it.”