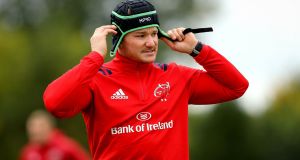 Munster’s Chris Cloete puts on his scrumhalf during training ahead of their Champions Cup fixtures this weekend. Photo: Ryan Byrne/Inpho

Munster have announced the extension of contracts for five players while also confirming that Nick McCarthy will join the province from Leinster, as previously reported by The Irish Times.

McCarthy has followed Joey Carbery and Andrew Conway by leaving Leinster to further his playing prospects and will act as an understudy to Conor Murray at Munster.