Gerry Thornley: Ireland have turned a corner and they’re looking ahead again 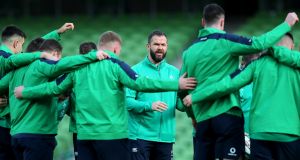 Ireland have won both of their Six Nations fixtures under Andy Farrell. Photograph: Ryan Byrne/Inpho

Okay, it may be stretching things to say that this revived Irish team has drawn a line entirely under the events of 2019 and the World Cup by dint of two home wins over Scotland and Wales. But at the very least, as all roads lead to Twickenham, they are no longer looking in the rear view mirror.

Beating their fellow celts in the biennial years when they have hosted them in Dublin cannot be taken for granted, even if it is often assumed. It was achieved in 2014 en route to the title and in 2018 on the way to the Grand Slam, while Ireland drew with Wales in 2016. But in 2008, 2010 and 2012, Ireland lost at home to either Scotland or Wales.

This time, because of the 2019 Six Nations and the World Cup, the stakes were that bit higher. Had Scotland managed to force a draw with either of the game’s final two plays last Saturday week at the Aviva Stadium it would have been very deflating for team and public alike.

In many respects, last Saturday’s game seemed like a defining one for Ireland’s 2020 Six Nations. Had they lost to Wales, some if not all of the demons from last year might have resurfaced. Ireland would have been staring down the barrel of treks to Twickenham and Stade de France with the very real danger of winning just two games out of five and finishing in the bottom half of the table for the first time since the pre-Joe Schmidt days of 2013.

That would have constituted a disappointing and even slightly demoralising campaign, and there would have been more looking back in anger.

Instead, Andy Farrell’s tenure as head coach of a revamped ticket and Johnny Sexton’s first Six Nations as captain has lift-off and momentum.

Of course, the stakes go up now and Twickenham is a tough place to visit, as Ireland know as well as anyone. That Grand Slam coronation in 2018 remains Ireland’s only win in their last half-dozen visits, the most recent of which ended in a record 57-15 defeat last August when they took the game on the hoof from a pre-season training camp in Portugal.

Yet the core of that side, circa ten of the same starting XV, will return to Twickenham with a new-found self-belief, particularly after beating Wales.

It wasn’t just the win, it was the manner of it. Despite the events of 2019, Ireland played with a freedom, ambition and confidence which never wavered, and that was an achievement in itself. Not that Ireland didn’t have any back play in the preceding six seasons, far from it, but there was a heightened willingness to probe for space out wide and to offload, with the backs actually having more carries than the forwards. Players such as CJ Stander and Robbie Henshaw looked almost re-invented.

Before the Six Nations, no less than Fabien Galthie’s desire to rekindle the French rugby public’s love affair with Les Bleus, Farrell spoke of his desire for the team’s performances to make the Irish public proud of them.

He could have bought time by more radically overhauling a team that, in truth, the public had stopped loving, but recognising the immediate need to win Farrell picked a team he believed best equipped to do so.

You can’t turn on the TV or radio these past few days without hearing the word “change”, and Farrell’s first two selections fell some way short of the clamour widely demanded, not least at scrumhalf. Last Saturday’s team contained 11 of the XV which started the World Cup quarter-final. Of course, some will contend that he could have made more changes and Ireland might have won scoring six or seven tries. Who knows? But Farrell has been largely vindicated.

Of course, it’s just two home wins. Even last Saturday’s improved performance was far from perfect. At their ruthless best, Ireland might have turned the screw sooner and even more clinically. The defence was opened up a mite too readily by Wales’s offloading game and the breaks have so far gone Ireland’s way.

But Farrell has also conducted himself very well simply by dint of being himself, which he said he’d do, and by extension the players are doing so as well. Already it seems a freer, more expressive environment, both on and off the pitch, as evidenced by Farrell’s own more animated presence in the coaches’ box. He’s not quite Michael Cheika, but Farrell doesn’t mask his emotions.

Maybe it’s something to do with Sexton’s captaincy as well, but beginning with the newly appointed skipper, the players are coming across as more relaxed and open, more giving of themselves. With more player input at meetings, in reviews, in tactics, there’s also less guardedness, less working off a pre-ordained script.

Now the pressure going to Twickenham is not as acute as might otherwise have been. That doesn’t make this latest Anglo-Irish meeting a free hit. This Irish team are too high achieving a group, and this fixture is simply way too big, for that to be the case. But Ireland ought to still be in contention for the title on the final weekend.

Not that the manner of England’s win over Scotland should be downplayed just because of its ugliness. In those conditions it couldn’t have been pretty, and winning away from home amid such hostility and in such a manner will have done as much for England’s sense of camaraderie in the away dressing-room. It’s also the only away win to date.

However, they won’t have Billy Vunipola and Manu Tuilagi and this fixture does not look as daunting as it did at the outset of the tournament. All eyes ahead.