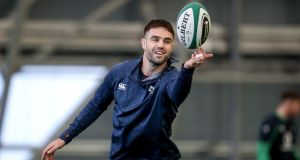 The Andy Farrell era got off to a victorious albeit underwhelming start last weekend, as Ireland slugged their way to a 19-12 win over Scotland in Dublin.

It was a tense, taught and at times grisly affair at the Aviva Stadium, with Gregor Towensend’s side arriving clearly intent on earning revenge after their 27-3 defeat in last year’s Rugby World Cup.

But despite delivering a decent performance the Scots returned across the Irish sea empty-handed, with only the haunting image of Stuart Hogg dropping the ball over the try-line to show for their efforts.

As for Ireland, it was a case of job done – just – and they know they must improve with a far sterner test lying in wait on Saturday.

The Grand Slam champions are coming to town, fresh off the back of an opening victory over Italy and determined to start a new era of their own by retaining the title.

Indeed, Wales will provide Farrell with a much better understanding of where his side currently stand - and the improvements needed if they want to really challenge for the Championship.

Here is everything you need to know before the second weekend of the 2020 Six Nations gets underway in Dublin.

Ireland are taking on defending champions Wales in the second round of the Six Nations, at the Aviva Stadium.

The match takes place on Saturday March 8th, and is a 2.15pm kick-off.

(all matches live on Virgin Media One, UK channels listed after each game)

Virgin Media One are showing all of this year’s Six Nations matches free-to-air and their coverage will be starting at 1pm (what they’re going to talk about for an hour and 15 minutes, we aren’t quite sure). You can also watch it on ITV (coverage 1.25pm), and you can follow it on the Irish Times liveblog, which will be coming live from the Aviva Stadium from around 1.30pm.

As well as Ireland’s hard-fought victory over Scotland, Wales also got off the mark with a bonus-point 42-0 win over Italy at the Millennium Stadium and currently top the table. However, the most eye-catching result of the opening weekend came in Paris, as a reborn French side beat England 24-17, blowing the entire tournament wide open in the process.

Andy Farrell has made just two changes to his Ireland XV from last time out, with both enforced by injury. Robbie Henshaw replaces Garry Ringrose, who will also miss the round three match against England with a hand injury, while Peter O’Mahony comes in for Caelan Doris. The 21-year-old number eight suffered a concussion in the early stages of his international debut and misses out this week. There’s also a place in the squad for Keith Earls as well as Max Deegan, who could earn his first cap off the bench.

Pivac will announce his team on Thursday and he isn’t expected to make too many changes, with Nick Tompkins potentially coming in at centre following his try-scoring debut against Italy, with George North reverting to the wing.

If any Ireland fans are struggling to adjust to life after Joe Schmidt, then take a second to think of the Welsh, who saw Warren Gatland depart after 13 years following the World Cup – a record tenure for a tier one coach. Gatland has returned to New Zealand to take charge of the Chiefs, and will take a sabbatical in 2021 to try and mastermind the Lions to a series victory in South Africa. He has been replaced by compatriot Wayne Pivac, with Wales likely to adopt a more expansive style under the former Scarlets coach.

With Gatland having coached Ireland from 1998-2001 there was often plenty of needle in the build-up to fixtures against his Wales side – however he departed with honours even between the two sides. In 16 matches against Ireland, Gatland oversaw eight victories, one draw and eight defeats. His last meeting with Ireland came on March 16th last year, as Wales secured the Grand Slam with a 25-7 win in Cardiff. Pivac has big boots to fill.

One of Farrell’s biggest selection decisions has been at scrum half. He gave Conor Murray the nod against Scotland and he has retained his place again this weekend ahead of Ulster’s John Cooney.

And in his Irish Times column this week, Gordon D’Arcy has suggested Farrell is taking a big gamble by picking Murray ahead of his in-form counterpart.

He writes: “Murray’s stalling at rucks is similar to how he plays for Munster. They don’t play at a fast pace, which is fine, unlike Leinster and Ulster.

“The pertinent question is which way do Ireland want to play?

“I believe it needs to be at a quicker pace. I also feel Andy Farrell’s selection of the tried and trusted will be judged harshly if Wales win in Dublin. The championship is on the line, Ireland simply have to win all their home matches, so Farrell has clearly edged towards the players he knows best.

“It’s a pity because John Cooney and Max Deegan are the way forward right now.”

How about for the tournament?

There’s been plenty of movement in the market, especially after France’s win over England which has seen Les Bleus shorten dramatically for the Championship.

Unsurprisingly, this one’s a complete sell out.

France’s Romain Poite will be giving two of world rugby’s most respected generals – Johnny Sexton and Alun Wym Jones – their orders on Saturday.

There's a storm brewing - Ciara's on her way, bringing with her the usual wicked winds and plenty of rain. Buckle up.

Looks like it’s win or bust at Twickenham then, lads. . .