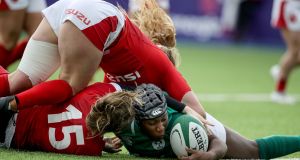 Ireland recorded a bonus-point triumph against Wales in at times atrocious conditions at Donnybrook on Sunday to move to the summit of the Women’s Six Nations Championship table.

Tries from Beibhinn Parsons, Cliodhna Moloney and Lauren Delany helped Adam Griggs’s side established a 19-0 buffer on 34 minutes. And although Wales had five-pointers of their own either side of an outstanding Linda Djougang contribution, a late penalty try ultimately put the seal on a second consecutive victory for Ireland in this year’s campaign.

Wales placed their hosts on the backfoot during the opening exchanges and it seemed like only a matter of time before the visitors opened their account.

That was until a booming clearance from returning fullback Eimear Considine brought Ireland into the opposition half for the first time on 16 minutes. Wales were less successful when it came to exiting their own ‘22’ and when Parsons discovered a gap through the heart of their defence, she sprinted over the whitewash in devastating fashion.

This was the third Six Nations encounter in succession that the teenager registered a try – including last weekend’s decisive intercept effort against Scotland. Fellow Galwegian Moloney also crossed over in that opening round and she got on the end of an intricate attacking move to secure a superb 26th-minute try.

Confidence was beginning to flow through the Ireland side and the impressive Considine was on hand to release Delany for a clinical finish on the right wing. Welsh loosehead prop Gwenllian Pyrs was subsequently sin-binned for her high tackle on Ireland captain Ciara Griffin, but they made light of their numerical deficiency as Lauren Smyth claimed an unconverted try on the stroke of half-time.

While Ireland held an encouraging 17-5 cushion at the interval, they had to be wary of a potential backlash on the restart. The minds of the partisan crowd were initially put at ease when outstanding tighthead Djougang powered over the line for the bonus-point score.

Claire Keohane’s conversion extended the gap to 19 points before a resilient Welsh fired back with their second try of the contest. At the end of an extended lineout maul move, visiting captain Siwan Lillicrap dotted down to the left of the posts.

This was supplemented by a Robyn Wilkins bonus strike – offering renewed vigour to the Welsh challenge in the process. Though conditions were quite favourable up to this juncture, Storm Ciara proceeded to wreak havoc for the final half-hour of the action.

Understandably, this had an adverse effect for both sides with attacking flair making way for a more attritional brand of rugby. Given they had a healthy cushion at their disposal, Ireland were happy to close out the tie in an effective and thoroughly professional manager.

The introduction of fresh blood off the bench helped in this regard with Larissa Muldoon making her first appearance since the 2017 World Cup. While Wales battled bravely for additional scores, Ireland had the final say when their rolling maul delivered a fifth try with the clock in the red.