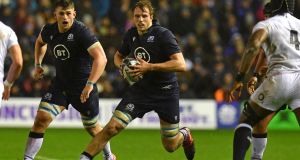 Jonny Gray has been ruled out of the rest of the Six Nations. Photograph: Paul Ellis/Getty/AFP

Scotland’s Six Nations campaign has been dealt another blow after Jonny Gray was ruled out for the remainder of the tournament.

Gray suffered a hand injury during the Calcutta Cup defeat by England on Saturday and the Scottish Rugby Union confirmed he would return to his club, Glasgow, for “ongoing care and assessment”.

The influential 25-year-old won his 57th cap during Scotland’s 13-6 defeat at Murrayfield.

Scotland have also been without injured winger Darcy Graham and stand-off Finn Russell — following a breach of team protocols — for the frustrating defeats against Ireland and England.

Gregor Townsend’s team face Italy in Rome in their next match on February 22th.