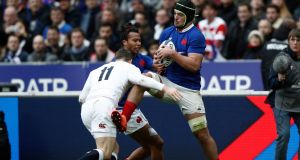 France’s Grégory Alldritt against England in Paris. He is not the most powerful eight in the world, but he regularly finds a weak shoulder or gaps to make additional yards. Photograph: EPA/Yoan Valat

Well, the love story has been rekindled, and how.

With expectation already high in the build-up to the game, Sunday’s audience on France TV reached its highest point for a rugby game since 2014, with 39 per cent of the market share (5.7 million viewers) and a peak of 55 per cent.

Midi Olympique’s front page carried a picture of Antoine Dupont making a break under the heading “C’est si bon!” (It’s so good!) in reference to a classic French song.

L’Equippe’s front page lauded the win under the heading in English: “Sorry, good game.” This was the sardonic use of the famous words, seen as smug in French rugby, said by Will Carling to the French team after England had beaten them for the eighth time in a row in 1995.

Inside, under its main report, the heading is: “Froid, comme les rosbifs.” This is a French dish best served cold.

The Bordeaux-based Sud Ouest carried a picture of Ollivon running in one of his tries under the title: “Deja grands”, ie already big men.

As was the case back in the days when the biggest Lansdowne Roar of the day during another home defeat might have been for the announcement over the tannoy of France beating England, in time-honoured Six Nations fashion their win over England was also popularly received abroad, not least in Ireland.

Whether France’s re-emergence will be quite so welcomed come the final weekend of the Six Nations, when Ireland visit Paris, remains to be seen. But that’s for another day.

For the moment, they’re back, Six Nations contenders again for the first time in a decade.

Italy’s low-key South African interim head coach Franco Smith is hardly going to assume the role of agent provocateur in the manner Eddie Jones did. Nor might France reach the same emotional peak as they did for “le crunch” next Sunday. Yet with Italy at home, Galthié will retain a competitive edge within his squad, juggle his resources, and take France to Cardiff in round three on nine points.

This renaissance has been founded on solid foundations, with Bernard Laporte supporting Galthie to the hilt. Not only has Laporte negotiated improved relationships with the French clubs, which afforded Les Bleus a camp in Nice as part of a two week run-in to this game, but he has backed Galthié like none of the latter’s predecessors

Improvements in defence are invariably quicker to implement, and Edwards’ impact was clear in France’s defensive effort against England. Already signed on for the duration of this World Cup cycle, in the immediate aftermath of Sunday’s win he could probably have signed a contract extension.

Edwards had explained to the players that lack of energy had not been a problem for them, but that they needed to use it in a controlled way.

In addition to the ramped up line speed, where previously they had struggled with close-in drives, against England they loaded up the fringes and stopped “les rosbifs” at source.

France had to make more tackles, but they had a 93 per cent success rate, missing only 14 of 207. Bernard le Roux led the way with 25, along with Gael Fickou (18), the other back five forwards and, remarkably, Romain Ntamack (14), not known for his defence.

Yet for all his attacking threat, Teddy Thomas will need to improve his work rate and tackling (missing two of just three tackles) under Edwards.

Ntamack is not known for his defence but, exhausted, after he missed another two, he was replaced for the last four minutes. But the magnificent Antoine Dupont was the only player in round one to play 80, and in the 77th minute prevented England from closing to within a score when nailing Willi Heinz.

Earlier he had used his acceleration, footwork and vision for that blindside break and try-scoring pass inside to Charles Ollivon. Dupont is on fire, and he has also improved his kicking game.

A la the team, the 26-year-old Ollivon could hardly have dreamed of a better start as captain, and nor could Galthié. Seemingly born to lead France, he is referred to as le Grand Charles – the nickname for Charles de Gaulle.

A true Basque, and a product of Bayonne, he is also ambitious, and after breaking into the French squad in 2015 at the age of 21, he moved to Toulon. His only previous appearance in the Six Nations was as a replacement at the Aviva three years ago. Returning to the squad for the World Cup warm-up games, this was only his 12th test.

The 22-year-old No 8 Grégory Alldritt, was sensational. He is not the most powerful eight in the world, but he regularly finds a weak shoulder or gaps to make additional yards.

Debutant fullback Anthony Bouthier also caught the eye, not least with that booming 90m touchfinder. Now 27, he was working as a builder until the age of 22 before joining the semi-pro ranks with Vannes, winning promotion with them in Fédérale 1 to ProD2, and only signed for Montpellier last summer. Connacht fans witnessed those two-footed kicks and quick balanced running last November in Galway.

What a find and, like Les Bleus, some story.