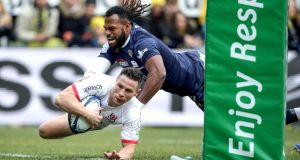 Ulster scrumhalf John Cooney gets over for a try despite the attempts of Alivereti Raka of Clermont Auvergne during the Heineken Champions Cup match at Stade Marcel-Michelin. Photograph: Dan Sheridan/Inpho

Though there are other permutations available in their peripheral vision, Ulster’s primary focus on Saturday afternoon is to simply beat Bath at the Kingspan and therefore reach the last eight of the Champions Cup for the second successive year and, once again, as a likely best runner-up.

The fact that their last round group game is at home, where Ulster have managed to put together 19 successive games unbeaten in all competitions since October 2018, and that Bath are bottom of Pool Three without a win in five games, more than suggests that the northern province will get there with something to spare.

However, there is still that niggling feeling that they might be just that bit more on edge after last weekend’s experience when their cast-iron hopes of finishing top of the pool, and potentially bagging a home quarter-final, shipped some terminal-looking damage at Stade Marcel-Michelin in a game where Ulster’s promising start fell away so badly.

Tasting defeat for the first time in this season’s competition, after setting a strong pace from winning all four previous European outings, also handed control of the pool over to new leaders Clermont Auvergne, who sit on 20 points, three ahead of Dan McFarland’s squad.

Though there is still a permutation which could see Ulster finish top of Pool Three it is hardly the most pressing issue now and especially so as Clermont are expected to win at Harlequins.

Instead, it’s a case of win and Ulster are in. So, they will be going all-out to guarantee likely second in the group and passage into the last eight by seeing off Bath and then, as with last season, heading out of Belfast for knockout rugby.

While Ulster may end up feeling a little bit better about themselves after today’s Ireland Six Nations squad announcement, there are concerns ahead of Saturday regarding Will Addison and Marty Moore – both in Andy Farrell’s initial expanded squad – after they shipped knocks at Clermont.

Though Moore is thought to be available for Bath, the luckless Addison was on crutches as he left France.

“No decisions have been made as yet,” said Ulster forwards coach Roddy Grant regarding Addison and Moore’s availability.

Though acknowledging that some of Ulster’s work at Clermont – where the province suffered only their fourth defeat of their season and the first not to yield them a point from either a losing bonus or try bonus – was clearly disappointing, Grant was intent on the positives.

“It’s a good place to be,” he said of Ulster being on the cusp of the last eight on the final weekend of group games.

“It makes things straightforward. We have to play well to win. And we’ll need to against a good Bath team. It’s in our hands so that’s the way it’s looking and that’s [getting the win] what we’ll be trying to do.”

Though some key lineouts malfunctioned in France, an area where Ulster could only manage three points from John Cooney – the scrumhalf scored all their 13 match points after also scoring a try, kicking a conversion and one other penalty – during what was a fairly limp second half, Grant stated that the squad simply have to move on to the next challenge.

“It’s a hard one, but you bin it. It’s also quite good if you have that disappointment and frustration as it shows you it could have been done. But you can’t wallow in self-pity,” said the former Edinburgh player.

A much better effort from the pack, who also had scrum troubles against Clermont, will also be required on Saturday against a Bath side Ulster defeated by a point in a dramatic finish at The Rec in November.