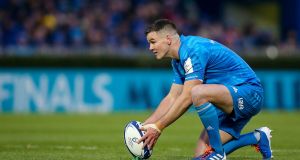 Johnny Sexton will not feature for Leinster this weekend. Photograph: Tommy Dickson/Inpho

There is still doubt as to whether Johnny Sexton will have recovered from a knee injury sustained in Leinster’s first European Champions Cup match against Northampton in early December before the beginning of the Six Nations Championship in two weeks.

The Irish outhalf is not available to play this week, although, Leinster believe he is making good progress and expect him to increase training loads over the coming days. Ireland open their championship against Scotland in Dublin on February 1st.

“Johnny is very professional and he is looking good,” said Leinster backs coach Felipe Contepomi. “But definitely he won’t make it this weekend. Hopefully he will be fit to at least be in contention for selection (for the Six Nations).

“He is looking good and recovering well. This is another extreme - he is not as young as James (Ryan) but having said that, he has always been a remarkable professional throughout his life, so that makes it easier for when he picks up an injury to recover.

“That’s what he is doing, he has been really good.”

Lock James Ryan is the other Leinster and Ireland injury doubt, although there is more optimism about his ability to play this weekend in the final pool game against Treviso in Italy. Ryan came off in Leinster’s match against Connacht with a calf injury and a final assessment on his availability will be made later this week.

“It’s not been that long since he got injured so we are taking it day-by-day,” added Contepomi. “I think he is making good progress, but with that type of injury, every hour counts nearly. We need to take it day-by-day.

“He is doing great. I think when you are as fit and young as he is, sometimes the recovery goes faster. It’s great for him but we will have to wait and see.”

Still Tuesday remains too early in the week to make a call for the final pool game against.

“Definitely. It’s early because it is a muscular injury,” said Contepomi, a qualified doctor. “You have to assess it. Even, he might go out and train or get up to speed and then you have a setback. You can’t tell much. If he can make it, good, but if not, we need to keep trucking.”