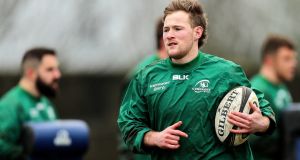 Ireland scrumhalf Kieran Marmion is ready to return for Connacht after recovering from a back injury. Photograph: Laszlo Geczo/Inpho

Connacht will return to France for the second time this season to complete their Champions Cup campaign, but with their focus firmly fixed on the Pro 14.

Sunday’s fixture against Montpellier may be a dead rubber with Toulouse and Gloucester presently both in qualifying positions in pool five, but coach Andy Friend says a performance in the Hérault capital is crucial in Connacht’s bid to again qualify for the Europe competition next season.

“We know we haven’t been performing at our best. We know we need to perform better. We know we are coming into three massive Pro 14 games post break which will define our season, so a performance is everything,” he says.

It was “tougher” than Friend expected, particularly its toll on players.

“I always knew it was going to be tough, but again Ulster, definitely a better team this year; Leinster, continue to go from strength to strength, and Munster are solid, so we know in interpro games we have to make sure we are keeping up to the speed of their improvements,” he says.

However, the Champions Cup is a “different animal”.

“Last year we played some good sides in the Challenge Cup – Sale and Bordeaux in particular – but Gloucester, Montpellier, and Toulouse are better calibre again, so that has definitely stretched us, and with the injuries again that we have had, it has really put a stress on us.”

However, he now believes “Connacht are climbing their way out of it”.

“We are getting bodies back in. Sunday is a chance for players to get minutes, and it’s another opportunity to keep trying to build Connacht’s game to get the performance we are looking for.

Marmion, who has been out of action for several weeks with a back injury, returned to full training last week, and Friend says he is in great form.

“He’s has been brilliant in his rehab, working really, really hard. He has been working his backside off and you can see the energy, so I am excited for him to be back.”

However, it is not so good news for Stephen Fitzgerald, who will undergo surgery this week on his ACL, ruling him out for the season. Also unavailable are Ultan Dillane, who took a knock to his hip against Toulouse and Finlay Bealham with a quad injury. Conor Fitzgerald (ankle), Peter Robb, and Conor Kenny are all available, as are up-and-coming secondrows Joe Maksymiw and Niall Murray.